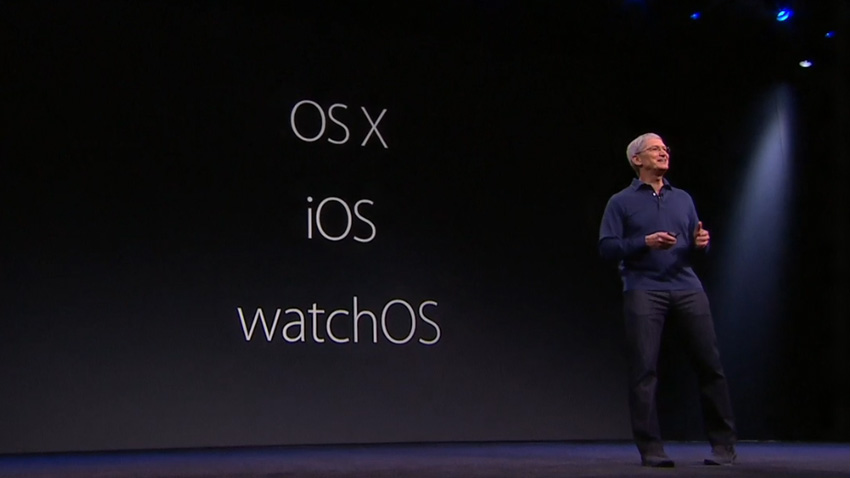 Declaring that WWDC was “the epicenter of change for the industry,” Apple CEO Tim Cook then went on to skip over a segment of the keynote address that’s never been skipped before: a summary of Apple’s domination of the markets in which it competes.

“Everything’s going great,” he said, to laughter, given the firm’s heady revenues and margins. But the curious omission comes at time of some uncertainty despite the iPhone’s incredible sales growth. The iPad, once seen as a key part of the company’s growth and an industry “game changer,” has in fact seen falling sales for six straight quarters. Apple Watch, while warmly received by the firm’s biggest fans, is overly complex and expensive, and is now not seen as a major new business. And even the iPhone continues to lose market share, due to the diversity of the Android ecosystem and an expansion of low-cost devices.

As a result, many of the WWDC keynote announcements were aimed at reversing these trends by adding Android-like features to iPhone and iPad, positing the iPad as a more suitable business tool, and making the Apple Watch more of a standalone device that doesn’t rely so much on iPhone. Apple also announced minor changes to OS X, its OS platform for Macs.

Mac OS X “El Capitan” 10.11. The next evolutionary update to Mac OS X will ship in the fall and add a Windows Snap-like side-by-side view for full screen apps, a new system font aimed at high DPI displays, and a number of improved built-in apps. But Apple isn’t yet bringing its iOS-based Siri digital assistant to the Mac, as Microsoft is doing with Cortana in Windows 10, and it focused most of WWDC on its mobile initiatives.

iOS 9. The next version of iOS—which runs on iPhone, iPad and iPod touch—is getting what appears to be a major update to Siri, with “proactive” functionality that will help it compete more directly with the advanced functionality found in Google Now. It’s picking up a low power mode—like the Battery Saver feature in both Android and Windows Phone—improved Maps and Notes apps, and a new News app. But the big news is new multitasking features, though many of these will be limited to certain devices. On iPad, a new slideover feature will let users slide a secondary app over the right side of the screen, and the system will support the same side-by-side app view as OS X, albeit only on a single device, the iPad Air 2. Android and Windows have supported this kind of functionality for a long time.

Apple Watch. Apple announced that its wearable platform is now called watchOS and it’s hitting version 2.0 this fall with a number of improvements aimed at helping Apple Watch do more without a nearby iPhone. It will sport beautiful new photo and time-lapse watch faces, extensible “complications” (a terrible word meaning mini-applet-like apps that can run over the main display), and more direct access to key Watch hardware and software features. Frankly, Android Wear is easier to use and comes in a variety of form factors, all of which are much less expensive than Apple Watch. And as a new platform, there’s still plenty of growth needed here.

Apple Pay. Apple’s eWallet solution is expanding from the US to UK this year and is picking up support for Discover plus a number of retail store credit and rewards cards. Google announced its own Apple Pay-like system a few weeks ago, and while Apple does have a head-start, the in-store and electronic payment systems used by Apple Pay are not proprietary and can be duplicated by competitors.

Swift. Apple debuted this new programming language in 2014 as a simpler alternative to ancient and arcana Objective-C language that the firm has been foisting on developers for decades. This week, it announced that it would open source the language later in 2015 in a bid to increase the popularity of Swift and take it to new platforms. Google hasn’t done much around language creation, but of course Microsoft has, and its C# language in particular is much less complex—and more open—than Objective-C in particular.

Apple Music. Surprising no one, Apple combined the old-school iTunes with Beats Music to create an all-in-one online music experience that includes a subscription element, similar to Google Play Music and Xbox Music with Xbox Music Pass. But those services are in some ways afterthoughts: the real target here is Spotify, which dominates the music subscription market. And Apple is hoping its tremendous devices success will encourage a compliant user base to stick with an Apple-branded service.

You can read more about these announcements in Apple Announces OS X, iOS and watchOS Updates and Apple Launches New Music Subscription Service on Thurrott.com.