The Closeness of the Cloud Makes Change Possible

One of the points made (I think fairly) by speakers at Microsoft Ignite 2019 sessions is that developing software for cloud-based systems is very different to on-premises servers. There’s nothing earthshattering in this thought. What is interesting is when you think about how different aspects of cloud services can be harnessed to address long-lingering problems.

Hundreds of Thousands of Failed Recalls

Which brings me neatly to message recall, a client-side Outlook desktop-only feature that has disappointed so many people over the last twenty or so years. Trying to recall a message is the last-gasp act of desperation executed when someone has a brain fart that leads them to send a message that is incomplete, inappropriate, foolish, or to the wrong audience (Figure 1). According to a Microsoft source, Exchange Online users try to recall messages about 800,000 times daily. Hardly any succeed.

You Want to Recall a Message? Good Luck!

The reasons why message recall fails are simple. Exchange can only recall a message if it has not been read, the recipient uses Outlook as their client, and the message hasn’t been moved out of the Inbox. Other conditions get in the way (read about them here), but the biggest problem has been that the message must remain in the same organization. Exchange can’t reach out and affect messages once they leave through a transport connector to another Exchange organization or other email system.

Long ago, when the feature was designed, it was reasonable to expect that a certain period would be available before recipients read their copies of a message. Servers were slower, connections between servers were slower, and most people weren’t perpetually connected to their mailbox through a variety of clients as they are today. A message sent by any client through Exchange Online is usually delivered within seconds, even to other email servers, and recipients often read messages soon after they arrive with mobile email clients. A small time window is usually available for the realization to dawn on a sender that they shouldn’t have sent a message and attempt to recall it.

Office 365 creates a new opportunity to revisit the problem. Although it serves millions of tenants, Exchange Online is a connected system. Actions can be taken across the system, even if a message leaves one tenant and is delivered to multiple other tenants. Messages can’t be recalled if they leave Office 365, but at least it should be possible to rescue careers and reputations across the 200 million active users of the service.

Removing the dependency on Outlook desktop is a big part of creating a better solution. Given the proliferation of clients in the Outlook family, it’s important that any new solution should be available across Outlook desktop (Windows and Mac), OWA, and Outlook mobile. It would be nice if any email client connecting to Exchange Online could recall a message, but that would take some reengineering of the old-but-solid ActiveSync protocol that’s unlikely at this point.

A New Take on Message Recall

At Microsoft Ignite 2019, the Exchange team discussed a possible solution to the problem using a new Outlook Recall Message service (online recording) that clients can use to request a message recall. The new service can’t recall every message, but it is better than before and internal testing within Microsoft shows that a much higher percentage of requests are successful (from such a low base, this wouldn’t be hard). Microsoft also promises a new aggregate message recall request report to show how successful a request is and who has managed to read a problematic message (Figure 2). 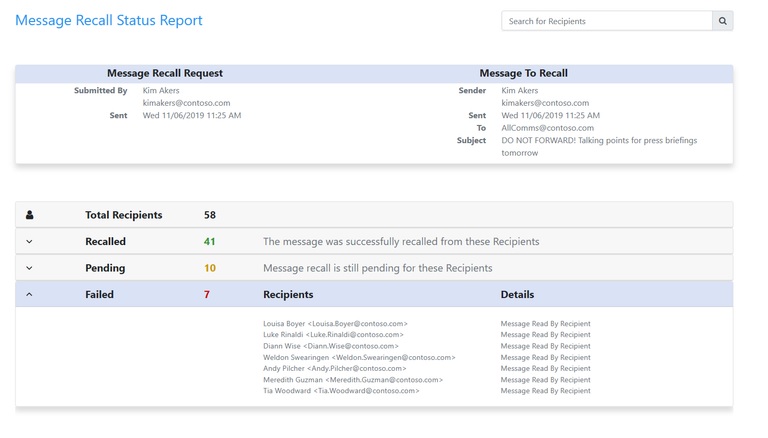 The work to build a new recall function is ongoing with no committed dates. Given the number of clients involved (especially Outlook desktop) and the complexity of rolling out new functionality across Office 365, it’s unlikely that we will see the new recall function much before the second quarter of 2020. If you can hold off making a fool of yourself until then, the new message recall will help. If not, well, you might not be so concerned about message recall.