Changes to the Security Center in Windows 7 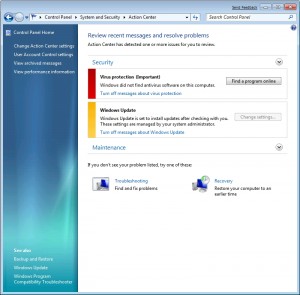 When Vista was released, the Security Center looked a lot like the Windows XP version, but there was at least some stuff going on behind the scenes. The Security Center not only monitors the state of various security mechanisms, but it can use that information to assess the machine’s health when Network Access Protection is being used.

The Security Center has been replaced by the Action Center.

The first time that I heard about this change, I just assumed that Microsoft’s marketing department had been at it again. After all, Microsoft has a long history of renaming features to make them sound more enticing or more useful. The change actually involves more than a simple name change though.

One of the big complaints that Microsoft received in regard to Windows Vista was that there were far too many nag screens and pop up balloons. These messages were often important, but they could be really annoying if the problem was not urgent, and the user did not want to deal with it at the moment.

Nag screens and popup balloons aren’t completely going way in Windows 7, but it does seem that Microsoft has reduced their frequency. This is where the Action Center comes into play. The Action Center is a console where you can see any security or maintenance issues that need to be addressed, all in one place. The idea is that by consolidating the various alerts on a system wide basis, users can fix the various issues in one place, and on their own schedule.

If you look at the figure above, you can see that security issues are color coded. Red indicates that an issue is urgent, while orange indicates that the issue is important, but not yet critical.

At the bottom of the Action Center are Troubleshooting and Recovery links that you can use to locate and fix a problem or to revert your system to a previous state respectively.

The Action Center can actually display more information than what you see in the figure though. According to Microsoft, the Action Center consolidates alerts from ten different Windows 7 features including things like Windows Defender, Backup and Restore, and even User Account Control. Any time that one of these features produces a non critical alert, an icon will be displayed in the taskbar. Users can click on this icon at their leisure to go to the Action Center and address the issue.

I don’t have a crystal ball, nor do I have any inside information from Microsoft regarding the future of the Action Center. Even so, I have a feeling that Microsoft created the Action Center to do more than just appease users who were tired of nag screens.

Being that so much alerting information is being consolidated into one place, I think that it seems only logical that Microsoft will create some sort of monitoring tool that works specifically by looking at the Action Center of every PC in the organization.

It remains to be seen just how effective the Action Center will be, and what it will actually look like when Windows 7 is released. I think that it is a safe bet though that users will appreciate having fewer alerts.

Top Tips for Importing & Exporting your VM with Hyper-V