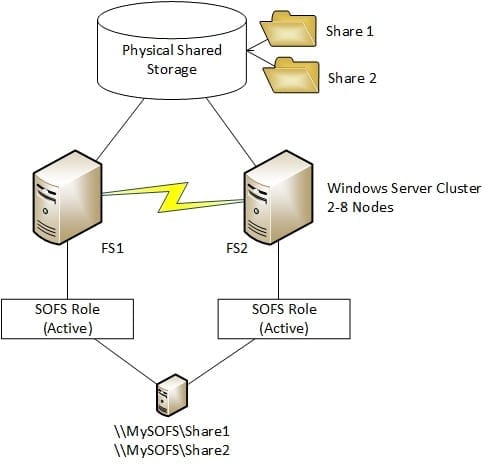 We’re back with our look into building a basic scale-out file server (SOFS). In the first post, I showed you how to create a scale-out file server. In this post I’ll show you what goes into designing a basic Windows Server 2012 Scale-Out File Server. This will offer scalable and continuously available SMB 3.0 connectivity to storage for workloads such as Hyper-V, IIS, and SQL Server.
(If you need to do some catching up, be sure to check out our previous articles on Windows Server 2012: SMB 3.0 and the Scale-Out File Server.)

A Scale-Out File Server (SOFS) is a Windows Server cluster with some form of shared storage. The cluster provides a single access point for applications to connect to the shared storage via SMB 3.0. This has two benefits:

A common misconception is that a SOFS is something like a HP P4000 storage appliance; this appliance is a server with direct attached storage (DAS) that cooperates with more appliances to create a single, striped, logical storage entity. This is not what the SOFS does. It is a traditional Windows Server cluster running a special SOFS role that is active/active across all nodes in the cluster. This role shares out the common physical storage of the cluster to other applications, as shown below.

All data that is shared by the SOFS is stored on some kind of shared storage. Between two and eight clustered servers are connected to this common storage. A special role, called the File Server For Application Data is activated on the cluster. This role becomes active on all nodes in the cluster and synchronizes settings through the cluster’s internal database. This role creates a computer account in active directory, and registers in DNS using the IP addresses of the cluster nodes. Shares are created on the common storage, and are shared out through all nodes in the cluster. Any application that wants to store or access data on the SOFS will use a UNC path that points to the SOFS computer account (MySOFS in the example) and the shared folder (\\MySOFS\Share1). 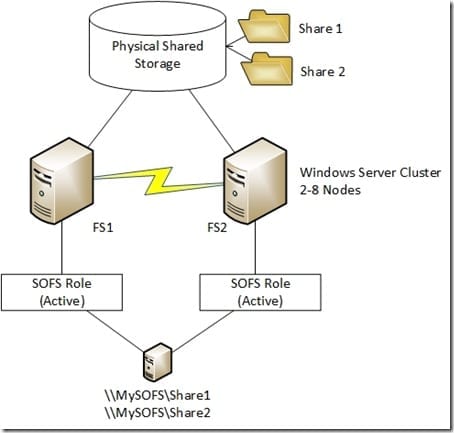 Any storage that is supported by Windows Server 2012 Failover Clustering may be used to create a SOFS. This includes traditional block storage:

Why would you consider using a SOFS to connect applications to your block storage? You might because:

Most examples of a SOFS that are presented will use “dumb” just-a-bunch-of-disks (JBOD) trays. Disk fault tolerance and unified management is provided by Storage Spaces. Windows Server 2012 R2 adds tiered storage and Write-Back Cache to improve both read and write performance of the JBOD, while retaining disk scalability. Note that WS2012 only supports mirrored virtual disks. WS2012 R2 adds support for parity virtual disks. A single JBOD tray might be considered a single point of failure. You can use three-way mirroring to storage the data of each virtual disk in the storage pool on three different JBODs that are all connected to the SOFS nodes.

A SOFS with three-way mirroring.

A SOFS is a Windows Server Failover Cluster and has the same basic networking requirements as a cluster. A number of networks are required:

At first look, it looks like you need five or six NICs to network a SOFS node. Using converged networks based on WS2012 and WS2012 R2 Quality of Service (QoS), you can use fewer, higher capacity NICs, and you can run multiple functions through those NICs. QoS, implemented by the OS Packet Scheduler, will ensure minimum levels of service for each protocol (SMB 3.0, RDMA, Remote Desktop, cluster communications, backup, and so on).