Recently I was given access to a new Drobo B800i iSCSI storage array for use in my home vSphere lab environment. I was impressed with the Drobo since I first learned about them at TechField Day, back in 2010. Some products you fall in love with from the moment you see them. The Apple iPhone and iPad were the consumer products that did it for me. When it comes to storage, the Drobo is the only product that I have ever been so enamored with, just from the first glance. Here’s why.

Simple, Sleek, and Flat-out Beautiful
As soon as you see it, you’ll say “wow, that’s a beautiful storage array.” The rounded form-factor is smooth. The front-cover slides on with just a rubber seal. The blue lights instantly tell you how much storage capacity you have remaining. You’d rather have it on your desk than locked away in the closet somewhere because it just “looks cool.”

BeyondRAID
Aside from being attractive, the single best technical feature of the Drobo is BeyondRAID. What it does is it eliminates you from having to worry about RAID types or carving out LUNs. You say how much storage you want to provide and Drobo does it with protection and minimal overhead. If a disk fails, you can insert a new disk, and Drobo rebuilds. It’s like having your own “robotic storage admin” taking care of these things so that you don’t have to.

You Provide the Disk
Hard drives are a commodity. The price fluctuates constantly and if you shop around, it’s likely you will find a great deal on the Internet. Thus, I think it’s smart that Drobo doesn’t require you to buy their hard drives with the array so you can provide your own (unlike with most other arrays in this category). Plus, maybe you already have some disks lying around that you can put in the array so you don’t have to spend anything (from your old array, maybe?). With BeyondRAID, you can mix different disk brands and sizes while still having RAID performance and redundancy. In other words, just “throw in some disk” and you are ready to go (and you have RAID redundancy and performance).

Thin Provisioning
You can create up to 16TB volumes that are automatically thin provisioned. Storage space is pulled from the common pool instead of specific disk LUNs.

Two Drive Failure Protection
Unlike other arrays, with Drobo, you’ll even be protected if the slim chance happens where two of your drives fail at the same time (top that!)

Dual Gig-E
Most Drobos come with dual Gig-E standard (mine did).

Simple and Slick Configuration and Administration
The administration tool used to configure and monitor the Drobo is small and easy to use. In fact, the interface is just as sleek as the Drobo unit is. Here’s what it looks like. 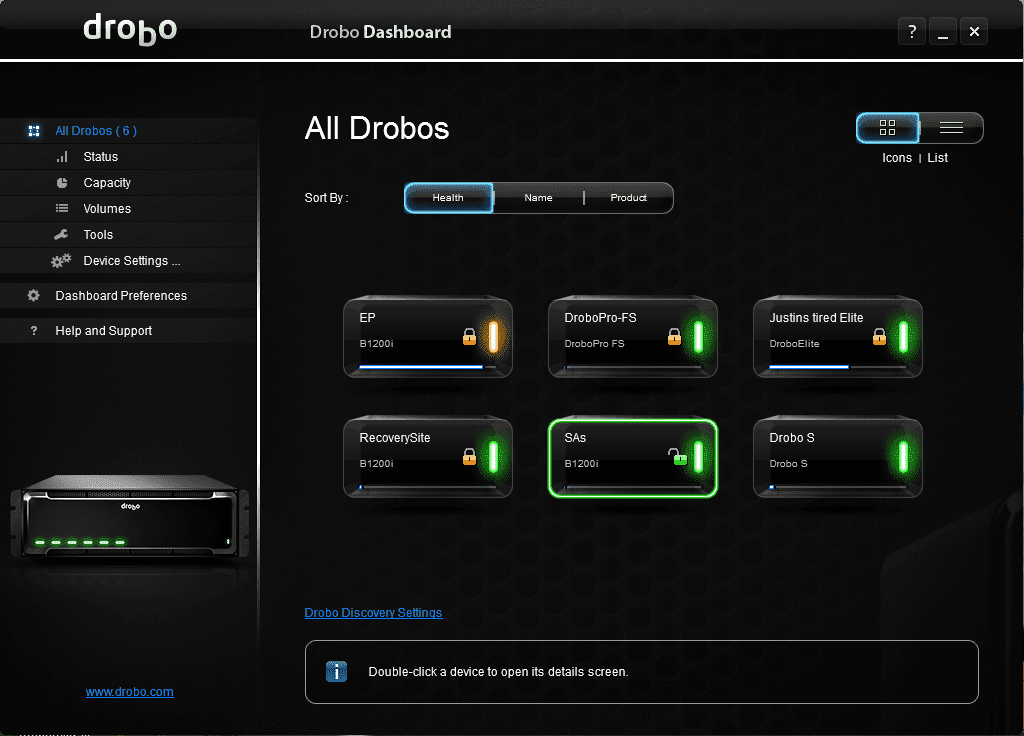 In the past, the typical user of Drobo arrays was the “pro-sumer” (professional consumer) such as a graphics designer. Today, the typical Drobo user is a SMB that uses Drobo for shared storage for the company or for a department. Drobo is popular with vSphere Admins for vSphere labs for small vSphere infrastructures.

Recently Drobo has made some significant advances that I need to mention. Here’s what’s new:

I am continually impressed with how Drobo is pushing the limits of SMB-level and “pro-sumer” storage. As I gain more and more experience with my new Drobo B800i, look for more information from me.

If you’d like more information about Drobo immediately, including videos and case studies, go to www.Drobo.com.