Everything You Need to Know About Windows – February 2020

This month sees Microsoft pull a standalone security update, release a Windows 10X emulator so that developers can start adapting apps to work with the upcoming dual-screen SKU, we get more details on the container architecture in Windows 10X, a public preview of FIDO2 support for hybrid Azure Active Directory deployments, and much more.

A standalone security update (KB4524244) that Microsoft issued recently for Windows 10 as part of Patch Tuesday has been removed from Windows Update after some users experienced problems. Microsoft says that users who installed the update could experience a couple of issues:

For organizations or users experiencing these issues, Microsoft recommends uninstalling the update. Microsoft has pulled the broken fix from Windows Update, Windows Server Update Services (WSUS), and the Microsoft Update Catalog. KB4524244 is a standalone patch so it doesn’t affect the cumulative update for Windows 10 that was rolled out via Windows Update in the first half of February.

Windows 10 Build 19559.1000 was released to the Fast ring February 5th. This build doesn’t have any new features but it includes a list of fixes. February 11th saw Microsoft release a new build of Windows 10 version 2004 (20H1) to the Slow ring. It is a cumulative update with security fixes that were released as part of Patch Tuesday. The Slow ring got another cumulative update February 27th with a series of quality fixes.

Microsoft released Windows 10 Build 19564.1000 to the Fast ring February 12th with changes to the Graphics settings page in the Settings app. Now the app list and GPU preferences are pre-populated to improve the default management experience. If an app is not pre-populated, users can still add it using the app selection dropdown menu. Now there’s also a search box and filter for the ‘apps’ list.

Everything You Need to Know About Windows – February 2020 (Image Credit: Microsoft)

This build also includes a preview of the new Calendar app for Windows 10. Microsoft says that the app has new themes, an improved ‘month’ view that includes an agenda pane, easier event creation, and a redesigned account navigation pane. 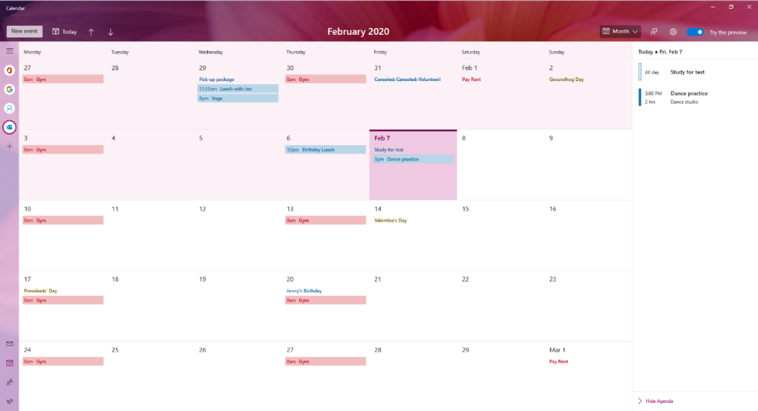 Everything You Need to Know About Windows – February 2020 (Image Credit: Microsoft)

Research and feedback from Windows Insiders showed a desire to see consistency in design and connection to the brand, with enough differences to aid in recognition. You can read all about our approach to updating the icons in Windows 10 in this Medium post from the Microsoft Design Team!

The stable channel of Microsoft Edge, which is supposed to see updates roughly every 6 weeks, got an update February 7th. Moving the version number up one from 79 to version 80. The main news is that version 80 brings ARM64 support.

In more Edge news, Microsoft is promising improved performance in the next version of Edge. In a post on the Windows blog, Microsoft says that starting in Microsoft Edge build 81.0.389.0 on 64-bit Windows 10, new toolchain optimizations should provide substantial performance improvements in general browsing workloads. Microsoft says:

We’ve measured an up to 13% performance improvement in the Speedometer 2.0 benchmark when compared to Microsoft Edge 79. Speedometer measures performance by simulating user interactions in a sample web app across a number of DOM APIs and popular JavaScript frameworks used by top sites, and is generally regarded as a good proxy for real-world performance across a number of different subsystems including the DOM, JavaScript engine, layout, and more.

On the official Windows Insiders Twitter feed February 25th, Microsoft announced that it would start rolling out the new version of its Edge browser to users in the Release Preview ring. Microsoft released the first stable version of the browser in January as a standalone download. At the time, it announced that the browser would be deployed automatically to Windows 10 users via Windows Update. But Microsoft didn’t say exactly when that would happen. It now looks like the new browser might reach Windows Update, for Windows 10 1803 users or later, sometime in the next couple of months.

Windows 10X is the version of Windows that most people will want and need going forwards. That won’t happen with the first version of the OS and devices. But it doesn’t make sense for organizations to continue supporting Windows 10 as it is today if there is a significantly more secure, manageable, and productive SKU that provides backwards compatibility with existing line-of-business apps.

Microsoft was expected to release Windows Terminal 1.0 in January this year. But that didn’t happen. We do however have a new release this month with version 0.9. In this version, we get command-line arguments for launching Windows Terminal, the ability to detect the best version of PowerShell to use as the default, drag-and-drop, and copy and paste capabilities.

For more detailed information on this release, check out the notes on GitHub.

That’s it for another month.

Guide: How to Install Windows Server 2019