On-Premises Exchange Not Going Away Just Yet

The End of a Twenty-Five Year Road?

A comment posted by a Microsoft employee to a blog post about the Exchange 2019 sizing calculator caused some furor when he stated that Exchange 2019 will be the last on-premises version.

Figure 1: Whoops… did something slip out? (image credit: Tony Redmond)

Microsoft removed the comment soon afterwards, but that didn’t stop the flow of questions. Some of the commentary has been uninformed. Some silly. And some plain stupid. Let’s consider what might be happening.

The Future of Exchange Needs Discussion

Obviously, some discussion about the future of on-premises software has happened inside Microsoft. This is perfectly natural and it’s what you’d expect any company going through a product transition to do. Remember, we are twelve years into the Exchange Online journey, and even longer if you include the Exchange Labs deployment. It’s utterly unsurprising to learn that some in Microsoft might consider that it doesn’t make sense to ship future versions of on-premises products like Exchange and SharePoint.

But one opinion doesn’t constitute a corporate decision and even though hundreds of millions of Exchange mailboxes have moved to Office 365, there’s still a substantial customer base who either prefer to run on-premises email servers or can’t move to the cloud for some reason. Some estimates put the overall Exchange installed base at more than 350 million mailboxes. If you compare that against the public Microsoft position that 200 million active users are in Office 365 (last October, maybe 220 million now), basic subtraction indicates that Microsoft still has many on-premises customers for Exchange.

The Question of Service

The question then becomes how to service these customers in the future. Some will reach a point where they can move to Office 365; some will want to stay on-premises. With a declining user base, does it make sense for Microsoft to create new versions on a three-year cycle as they have done since Exchange 2007?

The answer isn’t clear. Service contracts and customer expectations must be considered, and then there’s the undeniable fact that Microsoft engineering is not creating new features for on-premises servers at anything like the rate that they do for the online services. And the features that do trickle down originate in work done for Exchange Online. For instance, the metacache enhancement for database performance in Exchange 2019 speeds access to “hot” data, but its impact is much more important for the hundreds of thousands of mailbox servers running in Exchange Online than it is for any on-premises customer. 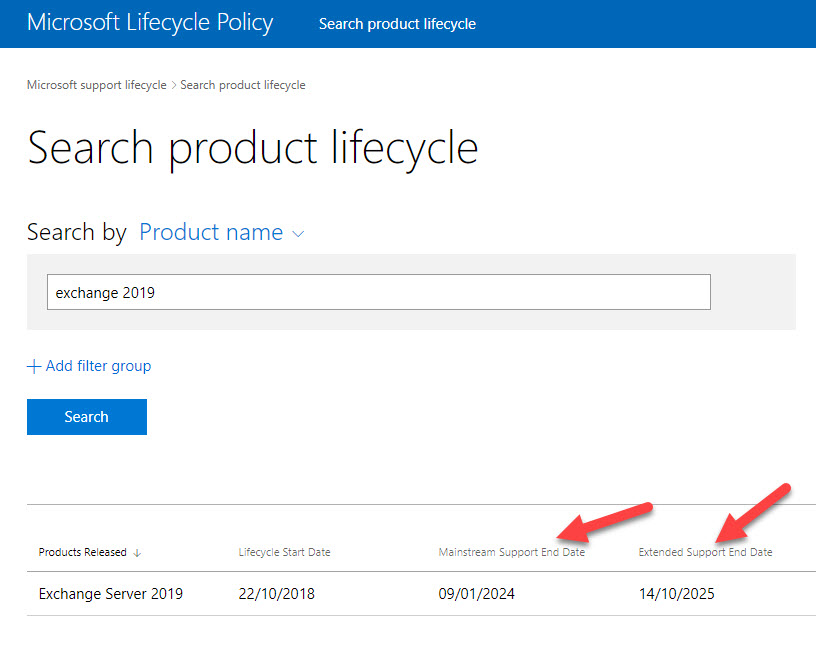 There’s nothing in Microsoft support commitments that says that Microsoft must create Exchange 2022 or Exchange 2025. We might have an expectation that these versions will appear, but that’s only because we’re grown accustomed to the cadence of on-premises releases.

It’s entirely possible that Microsoft might decide to make Exchange 2019 the fulcrum for long-term support for on-premises customers. Instead of pumping out new releases that might not contain much new functionality, Microsoft could offer customers a series of cumulative updates stretching into the future. As service contracts expire, customers could decide to opt-in to a new support arrangement, whatever might be on offer at the time.

Because email is now very much a commodity IT service, we’ll eventually get to a point where the remaining pool of on-premises users have very specific reasons for needing to operate their own servers. If we look forward five years, in 2025 the number of Office 365 users might exceed 325 million, meaning that the pool of on-premises users is much smaller than it is today. At that point, Microsoft could decide that these customers need customized support plans (probably at higher cost) if they wish to continue using on-premises Exchange.

I don’t work for Microsoft and have no influence over what happens. However, I suspect that the meaning of the comment that started this debate includes a nub of truth. I don’t expect Microsoft to ship on-premises versions of Exchange or SharePoint in the way they’ve done in the past because it just doesn’t make sense. I do expect Microsoft to meet their support commitments and keep on-premises customers going, but that support is likely to cost a lot more in the future. Quite when this might happen I can’t say.