Exchange Online PowerShell Goes RESTful – But Only for Some Cmdlets 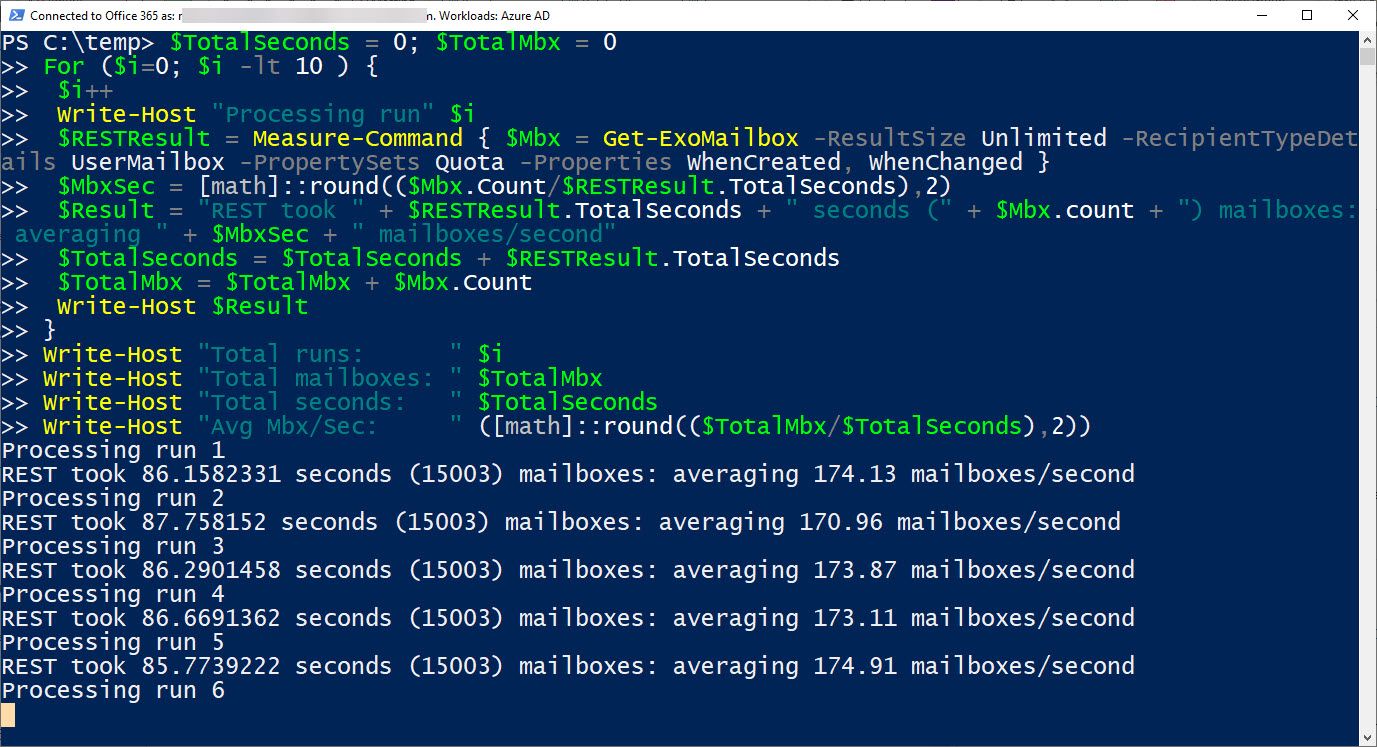 Slow and Painful Moving to Faster and More Reliable

Exchange 2010 introduced remote PowerShell (RPS) as the basis for Exchange server management. A decade later, we’re still using the same kind of technology to run cmdlets against Exchange cloud and on-premises servers. Remote PowerShell is OK for small to medium organizations, but it runs out of steam when exposed to the scale of the cloud. Scripts take hours to run, cmdlets sometimes fail to complete, and extensive error handling is needed to make sure that any session disconnects are handled properly. In short, Exchange Online PowerShell can be messy.

The good news is that Microsoft has a project to take a new approach to Exchange Online PowerShell.  Announced at the Microsoft Ignite 2019 conference in Orlando, Microsoft is building a set of new REST-based cmdlets that are much faster and more reliable. The new cmdlets are now available in a private preview with general availability expected in early 2020.

The bad news is that only nine of the 700+ cmdlets in the Exchange Online PowerShell module have been upgraded to date. More are coming, but it takes time for the transition to complete. Microsoft chose the target cmdlets very deliberately. After analyzing the most popular (heavily used) cmdlets and the ones that experienced most problems at scale, Microsoft prioritized this set of RPS cmdlets as upgrade targets:

The REST-based version of these cmdlets are prefixes with Get-Exo, so you end up with Get-ExoMailbox, Get-ExoRecipient, and so on. The new cmdlets are now available when you connect a PowerShell session to the Exchange Online Management endpoint (see below).

You’ll notice that the chosen cmdlets all fetch data. That’s because problems most commonly happen when scripts fetch large quantities of data (for example, information for 50,000 mailboxes) for processing. Updating an object like a mailbox or permission is a focused transaction; grabbing large sets of objects takes time and is prone to failure due to server or network problems.

More Cmdlets in the Pipeline

Microsoft says that they’re considering upgrading other cmdlets. However, they can’t yet say what cmdlets are suitable candidates for upgrade or when more might be available.

The REST-based cmdlets are stateless and have no affinity to a specific Exchange server. If a network problem affects a connection, the cmdlet can disconnect and connect to resume processing seamlessly with in-built support for retries following errors and the ability to resume from points of failure. In addition, Microsoft has taken a hard look at how the cmdlets access Azure Active Directory to make calls more efficient. There’s a fair amount of history here because Exchange has traditionally been liberal in how it allows objects to be found using anything from an alias to the old X.500-based distinguished name.

Another performance tip is to reduce the set of properties returned for objects to a minimum; if you want other (potentially expensive) properties you can ask for them and take the performance hit.

Installing and Running the REST cmdlets

To install the REST cmdlets, open an administrator PowerShell session and run this command:

Here’s the link to the module in the PowerShell gallery.

After the module is installed, you should be able to run the Get-Command cmdlet to find that the set of Get-EXO cmdlets are available:

You can then connect to the module and authenticate with the Exchange Online management endpoint to load both the REST and RPS cmdlets with:

To connect with a single sign on, specify your user principal name:

To see how the new cmdlets performed, I created a script to fetch 15,003 mailboxes with Get-Mailbox and Get-ExoMailbox and checked the elapsed time with Measure-Command. Here’s the script:

In Figure 1 you can see the script chugging away to fetch 15,003 mailboxes and results being generated.

The overall results of this test are shown in Table 1.

Table 1: Comparing the performance of REST and Remote PowerShell cmdlets

Results are even more impressive when you combine REST cmdlets. For instance, fetch a set of mailboxes with Get-ExoMailbox and pipe them to Get-ExoMailboxStatistics to report mailbox sizes. More information is available in my theater session about these cmdlets recorded at Microsoft Ignite 2019 and a follow-up post with the scripts I used in that session.

Your mileage might vary depending on the code you write, but it’s obvious from my tests that the REST cmdlets are much faster than their Remote PowerShell counterparts.

As you start to work with the REST-based cmdlets, you might notice that the first time you run a cmdlet against a set of objects, it’s not quite as fast as you might expect. The impression is especially strong with small sets of objects (under a hundred or so). The initial slowdown is because the cmdlets support pagination, so when a cmdlet begins to process a set of objects, it sorts the objects to allow the cmdlet to resume processing from a retry point should the need occur. During this period, the cmdlet is also evaluated against RBAC. I call this the “warm up” phase, and once it’s finished, access to the objects is fast and robust. You don’t notice this happening when dealing with large sets of objects because the time used to paginate is a much smaller percentage of the overall run.

The Effect on Scripts

All of this is goodness but moving to the REST cmdlets is not a simple matter of upgrading scripts to use the new cmdlet names. Here’s my list of upgrade steps:

If you need specific properties from a set, specify their name like this:

If you want every available property, fetch the All property set.

Moving Ahead to the Graph

Now that Microsoft has started to upgrade Exchange cmdlets to use REST protocols, will they introduce a Graph endpoint for Exchange management? According to Microsoft representatives at the Microsoft Ignite conference, “it’s on our backlog and we’re investigating the work that needs to be done.”

The priority is to complete the work on PowerShell because that will have a direct and beneficial impact on customers, especially those working in large-scale enterprise tenants. Of course, given the amount of PowerShell Microsoft uses to manage its own tenant, they’ll gain too. And that’s not a bad thing.