Hands-on with the Windows 10 Technical Preview 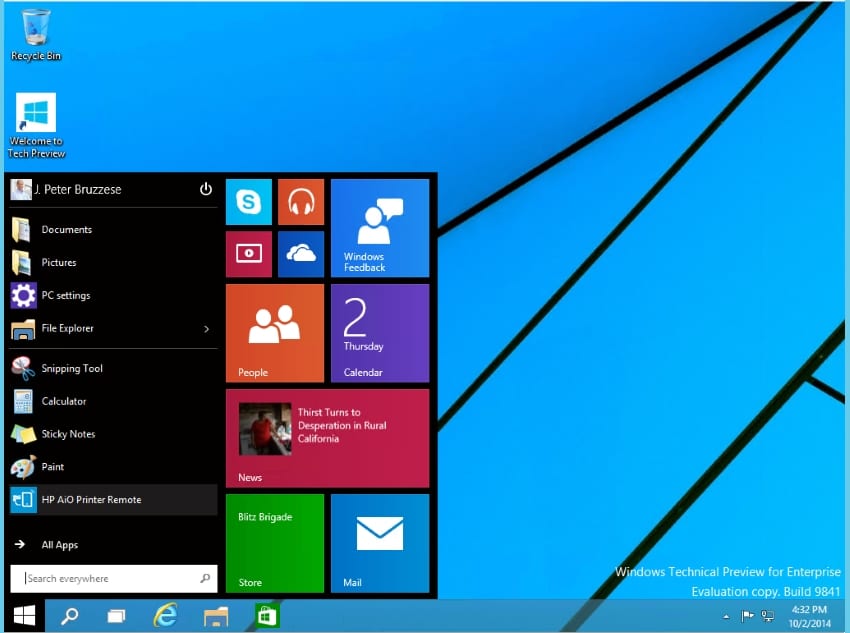 Jokes aside, what was announced this week in the Windows 10 reveal wasn’t a major revision to the underlying OS itself, or even a monumental upgrade on the visual side. Instead, it was a big, loud statement from Microsoft to their customers that says “WE HEARD YOU!” To which most customers responded: “It’s about time!”

Microsoft didn’t tweak the user interface in Windows 10 radically, which would have caused folks to render judgment yet again on their design choices. Instead, Microsoft opted for a blend of the old and the new, with a slick feature called ‘continuum’ that allows Windows 10 to more transparently switch between desktop and tablet mode, which is ideal for convertibles and those 2-in-1 systems. Microsoft seems bent on providing ‘one OS to rule them’ all across touch and keyboard and mouse devices. Even though Windows 8 didn’t cut it, Windows 9…sorry, I mean Windows 10 — may just hit the mark.

A First Look at the Windows 10 Technical Preview

Based on the install of the Technical Preview, which looked exactly like a Windows 8 install, the desktop version restores the Start menu when you click the Start button. But if you look at the new approach you get your customizable tiles built right into the menu.

As a Windows Phone user, I absolutely love the look and feel of this new Start menu. It has my applications easily available again with the All Apps feature and offers me my traditional access to File Explorer and all my shortcut folders, such as Documents, Pictures and so forth.

On the task bar you can see a little icon that shows two windows together, which you can see in the figure below. This is called the Task View, which allows you to add more desktops for virtual space, along with the ability to see apps easily so you can switch apps easily. 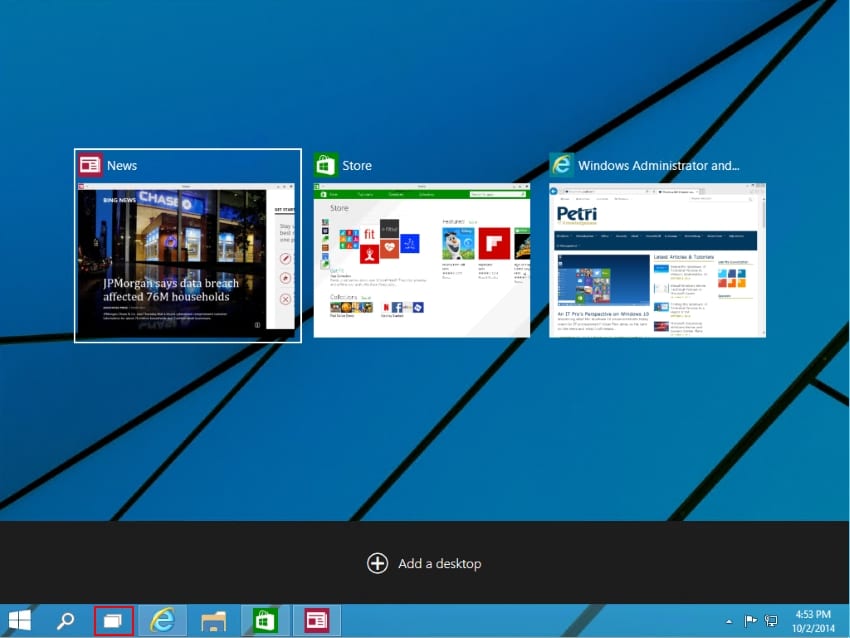 With the addition of virtual desktops, I wanted to see how many you could add, so I just kept hitting the plus button and it just kept going right off the screen, which you can see in the figure below. 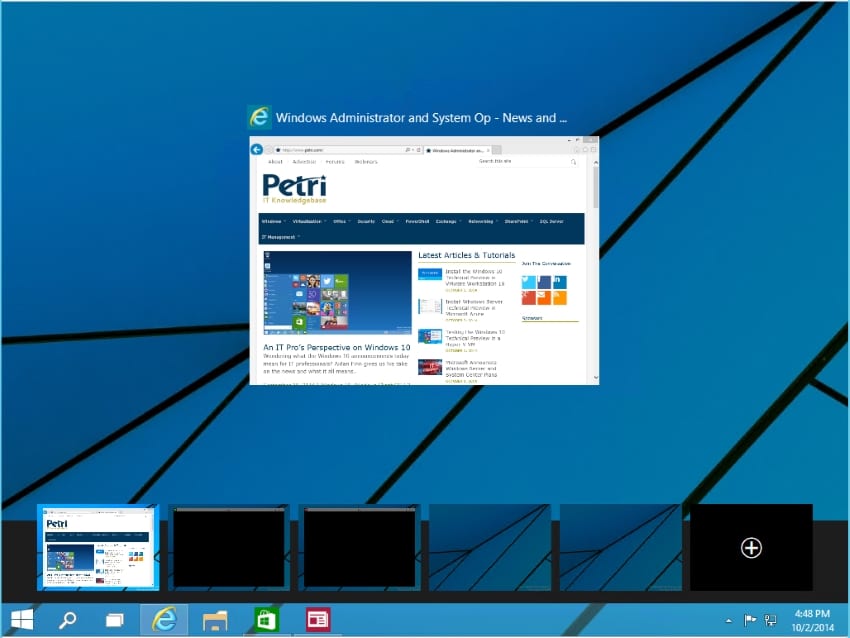 A new feature called Snap Assist gives you a better way to snap windows that actually mimics the older ways in which we used to be able to manipulate windows however we wanted. 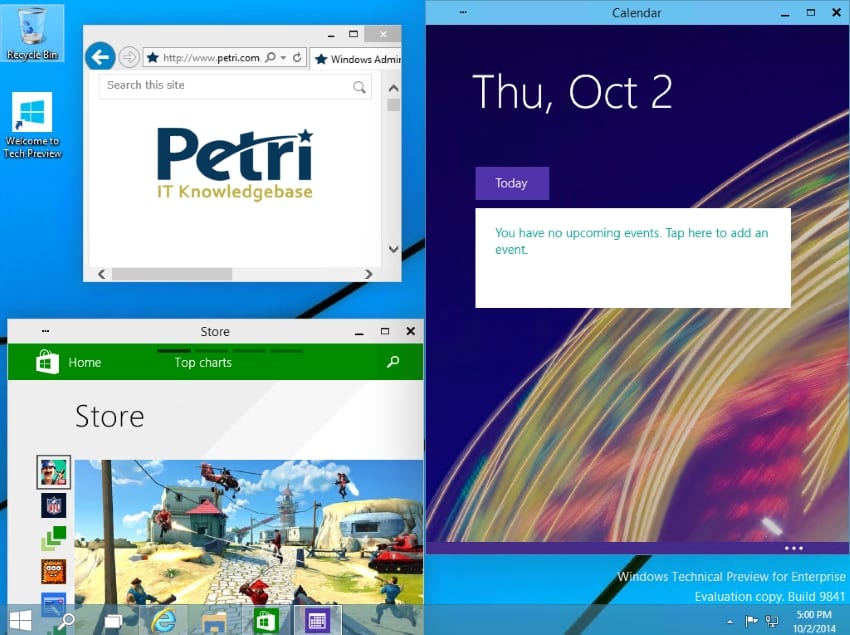 There are a few changes that only admins might appreciate, such as the ability to to paste into the Command Prompt, along with a bevy of additional hot keys that can be used. Automatic word wrapping is another cool feature for those who are still excited by any changes made to the Command Prompt.

The new File Explorer offers a new Home location link, which you can see below. There is also an interesting new Share icon on the Share ribbon that allows you to share the selected item(s) to an app. 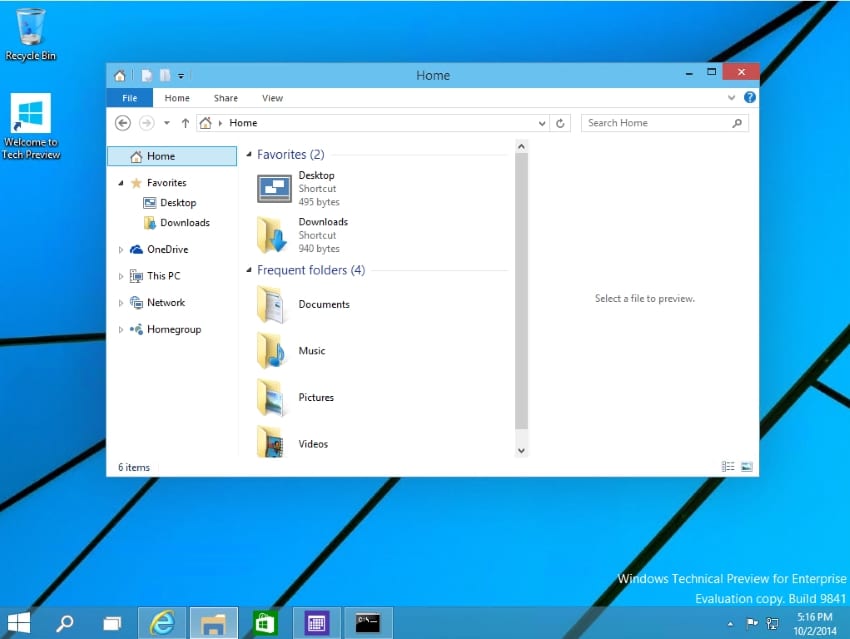 It’s time to discuss ‘continuum.’ Basically, desktops will act as such with no Start Screen blur action and takes you back to a desktop mode with a modern Start menu. Touch screen devices will act as such and have all the typical Start Screen easy-touch options with a slightly modified Start screen that shows the task bar at the bottom and Start menu to the left.

When you use a 2-in-1 device like Windows Surface, continuum will allow you to switch back and forth between the two based on the attached keyboard. Keep in mind that this is all still in Technical Preview. It’s called a design exploration because they have not come straight out and said this is how it will be on release. However, Microsoft needs and wants feedback to lock in the final design. Once again, Microsoft is saying we heard you, but we need to keep hearing you going forward.

Windows Store Apps (renamed Universal apps) call for a new model that allows apps to run on all devices from phones to desktops to servers with a single app store. We will no doubt learn more about this with the BUILD conference in April 2015. Universal apps will work on the desktop in their own Window, and we’ll have to see how they merge the two UIs in the final product in the end. In the Technical Preview, there is still a Charms bar, but its days may be numbered. We’ll have to wait and see.

My gut feeling on all of this? If Microsoft had released this design as opposed to Windows 8, then we would have had a much smoother consumer reaction. However, that’s not quite how the Microsoft consumer base works. Microsoft releases a version of Windows, the consumers rip it apart, Microsoft responds and the next release is loved by all. I believe Windows 10 will be loved by all, leaving Windows 8 to join the ranks of Vista, ME, 98 (not 98 SE). But remember, each of these vilified Windows versions were integral stepping stones to the flavor to follow that are beloved (98 SE, XP, 7 and soon 10).