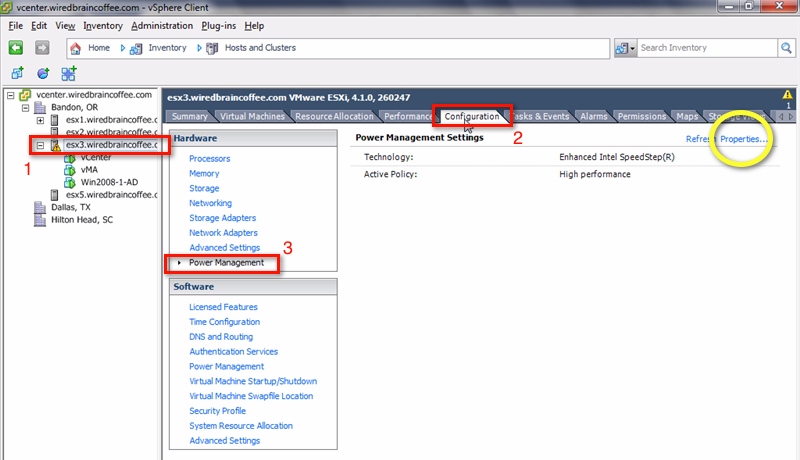 VMWare vSphere’s DRS (Distributed Resource Scheduler) is mainly used for load balancing virtual machines (VMs) on a cluster. While most virtualization admins will want to run DRS in fully automated mode – i.e., vSphere decides on its own which VM is assigned to which ESX Server – there may be certain instances when you would want to enforce some conditions by setting what are known as DRS Affinity Rules.

Instances wherein you would want to enforce DRS Affinity Rules

So what are some of those instances wherein you would want to dictate which VM or VMs should (or should not) be assigned to a particular ESX Server or group of ESX Servers?

Licensing Issues
Some applications running on your VMs may have licensing peculiarities such as:

Availability Requirements
You might want to prevent a group of VMs from running on particular ESX servers.

Performance Requirements
You might want to assign some VMs to your newly acquired multiple-CPU server.

How to configure VM to Host DRS Affinity Rules

Open your vSphere Client and find the cluster on which the rules will be enforced.

In the screenshot below, we’ll be enforcing the rules on DRS Cluster 1, which contains four ESX servers and a bunch of virtual machines. 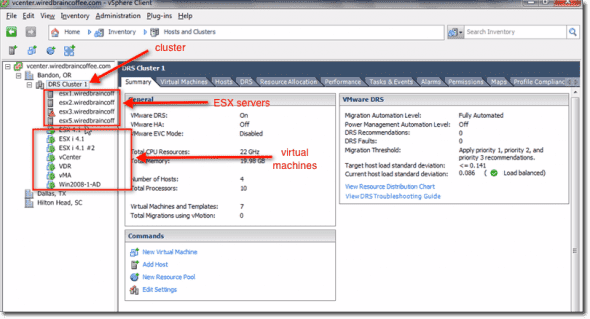 Right-click on the cluster in question and, in the corresponding context menu, select Edit Settings. 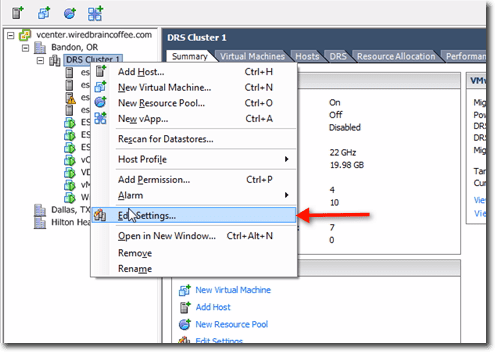 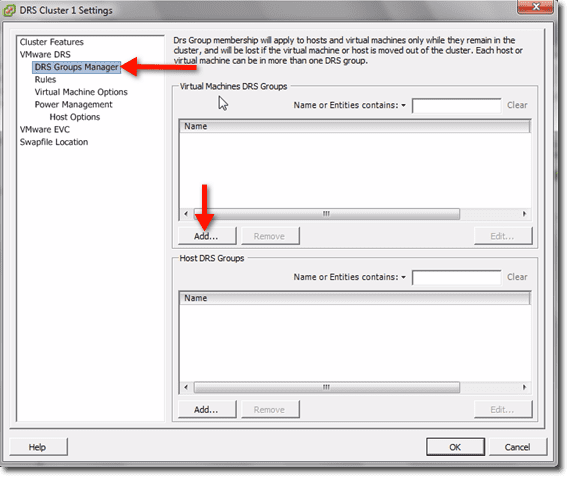 You can now select VMs that you’d like to add to your VM group. 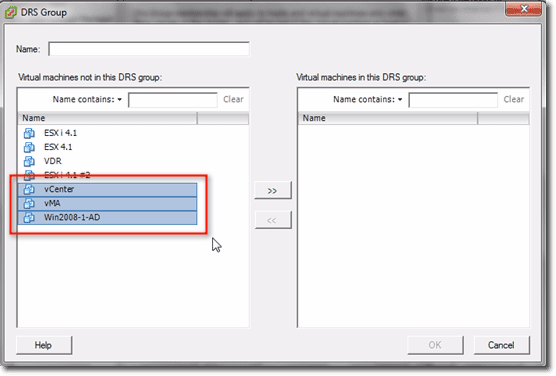 Click the “>>” button to add the selected VMs to the VM group. Once you’re done, give your group a name (e.g. vCenter-VM-Group), then click the OK button. 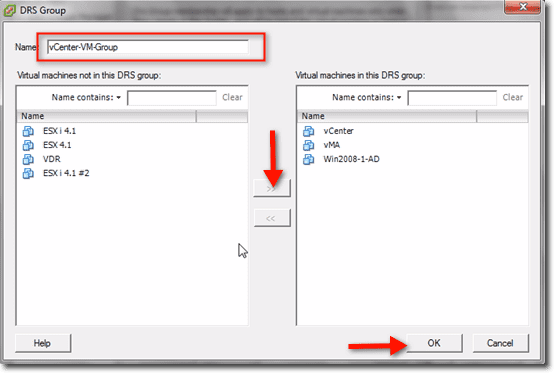 Back at the DRS Groups Manager, you can then create a Host DRS Group. This is the host DRS group where you’ll be assigning your newly created virtual machines DRS group.

Go to the Host DRS Groups panel and click the corresponding Add button. 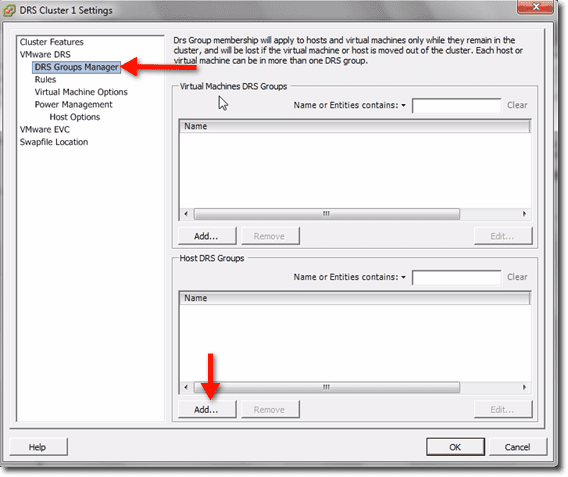 You’ll then see a similar window as the one where you added VMs to a group (see two screenshots back). Just like what you did with the VMs, select hosts that you want to add to the host DRS group and click the “>>” button.

Now, give the host group a name (e.g. ESX-DR-Group-1) and click the OK button. 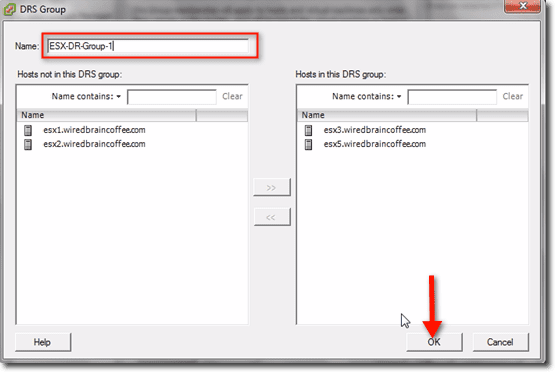 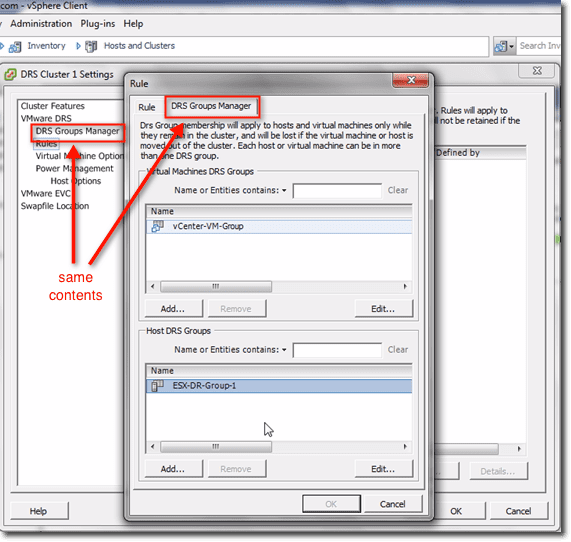 You are finally ready to create your DRS Affinity Rule. Click the Rule tab and come up with a name for your rule (e.g. Pin-vCenter-VMs-to-ESX-Group-1). 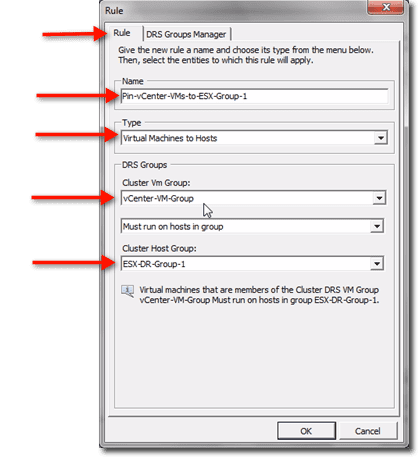 Notice that we skipped one drop-down list. In the screenshot, it’s the one that says “Must run on hosts in group”. That drop-down list is where you’re supposed to select the actual rule that will apply to the VM group-host group pair. 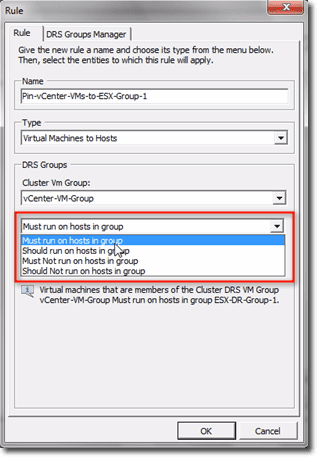 That should create your VM to Host DRS Affinity Rule.

You’ll see something like this (see screenshot below) in the succeeding window. You’ll have to click the “+” symbol to expand the VM to Host Rule and reveal the corresponding Cluster VM Group and Cluster Host Group on which the rule will apply. 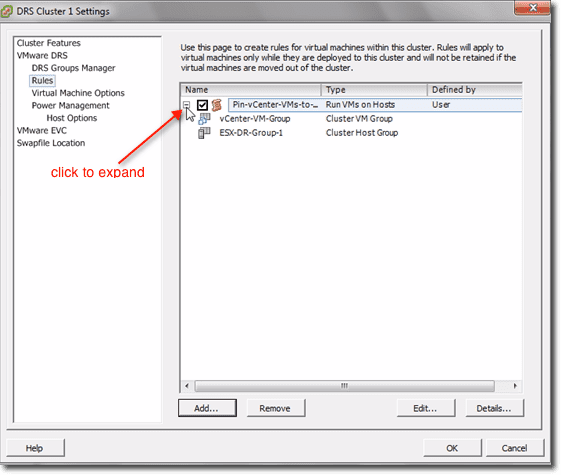 That’s it. You have just created a vSphere 4.1 VM to Host DRS Affinity Rule.