How Does Microsoft 365 Universal Print Work? 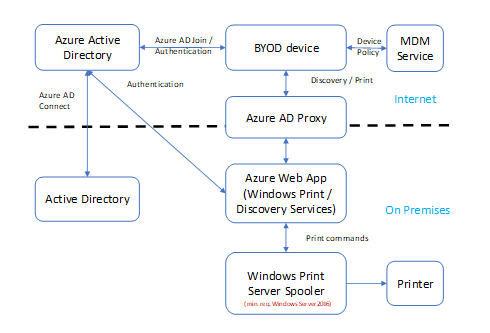 Brad Sams wrote earlier this year that Microsoft’s Universal Print was entering private preview. In Microsoft’s own words, here is a description of the service:

Universal Print, is a Microsoft 365 cloud-based print infrastructure that will enable a simple, rich and secure print experience for users and reduce time and effort for IT.

In environments where Azure AD Connect is used to synchronize Windows Server Active Directory (AD) users to the cloud, devices joined to AAD can access AD resources. Windows 10 knows the AD domain name and uses it to search for available Windows Server domain controllers on the local network. If it finds one, Windows 10 is issued a Kerberos Ticket-Granting Ticket (TGT) so that it can access AD resources.

Users can authenticate and access AD resources if they know where to find them. For example, if they have the UNC path to a file share or URL of a webserver using Windows integrated security. But without knowing the location or at least a name, locating AD resources isn’t a smooth experience on AAD-joined devices because tools can’t use LDAP to query AD.

Printers registered with Universal Print work with Windows 10 version 1903 and later devices. During the preview, only Enterprise and Education SKUs are supported, although the supported SKUs might change once the product reaches general availability according to a post by Microsoft.

Microsoft 365 administrators can define printer metadata settings and default preferences. For example, an administrator can set the printer location and color configuration. For a complete list of the settings and metadata that can be configured, see Microsoft’s website here.

By default, Universal Print only gives admins permission to access printers. Additional users or groups must be explicitly granted permission in the administrative portal. Printers are only discoverable by users once they have been shared. Again, this can be done in the admin portal by selecting the printer and then clicking Share Printer.

Users can add Universal Print printers to Windows 10 in the Settings app.

As you can see, Universal Print is basic if you compare it to all the features available in Windows Server. A year after Microsoft first started talking about the service, there doesn’t seem to be any way to automatically add printers registered with Universal Print to Windows client devices. Or the ability to deploy the solution for high availability.

But at launch, organizations that have simple printing needs might find Universal Print an interesting alternative to Hybrid Cloud Print. And Universal Print could ultimately enable the removal of all on-premises Windows Server print infrastructure. Hopefully, Microsoft will gradually add more advanced functionality to Universal Print as interest in the service grows.

If your organization is interested in getting involved with the private preview, fill out this form here.