If your organization doesn’t have a system for automatically installing software, like Microsoft System Center Configuration Manager (SCCM) or Intune; or use images that have all the required software pre-installed (fat images), then the next best way to install software quickly is to use a package manager. Even if you have just a handful of programs to install, package managers can save a lot of manual downloading and clicking through vendor websites.

Nevertheless, I recently reinstalled Windows on one of my PCs and was surprised to find how much was available to download from the Chocolatey online repository. If you want to use Chocolatey on a regular basis, you can create your own repository and packages. But in this article, I’ll refer only to the online public repository.

How to Install Chocolatey in Windows

First, you need to install Chocolatey on Windows. It’s easy but you will need local administrator rights. 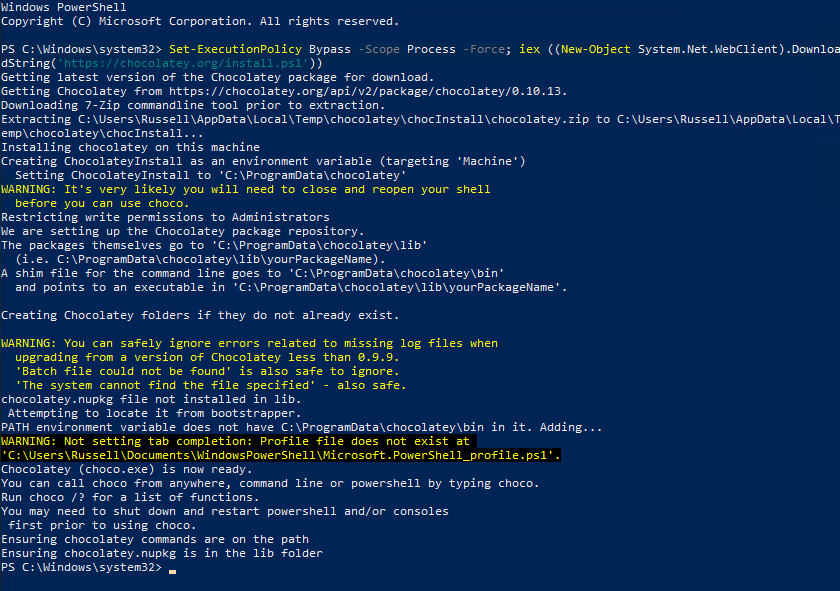 The first command changes the PowerShell script execution policy for the current process and then installs Chocolatey using a script (install.ps1). You’ll still be prompted to confirm that you are sure you want to run the Chocolatey installation script. The second command runs when Chocolatey is installed and turns off the confirmation that you must provide when installing each package.

First, I made a list of the software I wanted to reinstall:

Then I went looking on the Chocolatey website to see if there were packages available. Microsoft doesn’t make Office available on Chocolatey and that didn’t come as a surprise. Neither is Adobe Premiere Elements. Additionally, Microsoft Edge Dev channel isn’t there either. Again, no surprise considering it’s in beta. There is a package for VS Code, but I wanted the user installer so that I don’t need to elevate privileges when it updates. But Chocolatey is a system-wide package manager and it isn’t suitable for installing portable software or ‘user’ installs. So those four programs I installed manually.

The next step was to create the Chocolatey commands for each program.

According to the Chocolatey documentation, you should be able to install multiple programs using one command like this:

But that didn’t work for me. So, I just copied the above list of commands and let Windows run through them. Note that I specified a version number for SnagIt and Camtasia. That’s because if you don’t, you’ll get the latest available packages, which in this case are the 2019 versions of Camtasia and SnagIt. But I haven’t upgraded my licenses, so I needed to stay on the older versions. Once you’ve assembled a list of commands, run them in an elevated PowerShell prompt. 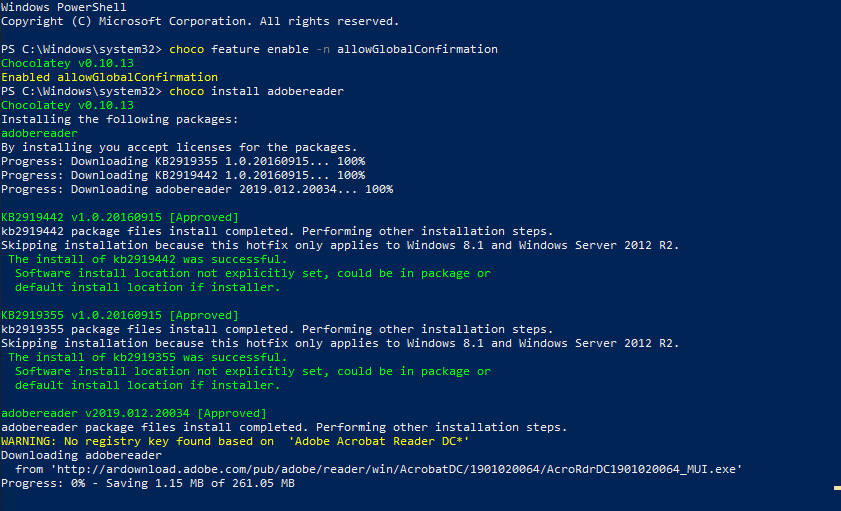 Chocolatey is a great tool for installing software after you’ve reinstalled Windows or purchased new PCs. While not all major programs are available as Chocolatey packages, I was able to install 80 percent of what I needed. Or if you are brave, you could create your own Chocolatey packages but that is better reserved for your own in-house software or simple tools that don’t have complex installers.