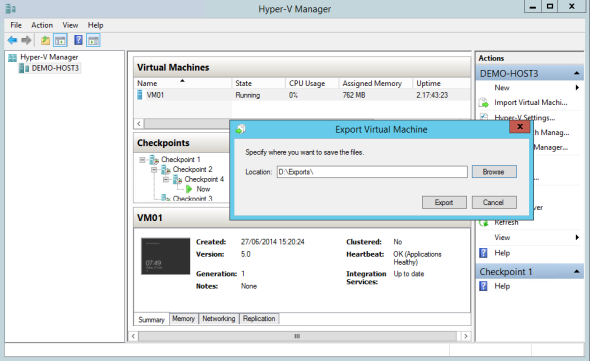 An export operation packages up a copy of a virtual machine so you can transport it to another Hyper-V host or cluster member and import the virtual machine. Performing that task in Windows Server 2012 R2 (WS2012 R2) is commonly referred to as “live exporting” of virtual machines. In this article, I will explain how WS2012 R2 improved how you can export virtual machines.

WS2012 R2 brought some new functionality that the community calls a live export. This package of features enables us to do two things:

You can later import the virtual machine to the same host or another host. But remember: If this is a copy of a running virtual machine, then you really should place the imported virtual machine on an isolated network. This process is like using Ghost to clone a physical machine and then deploying that image to another computer. You do not want identical identities on the same network.