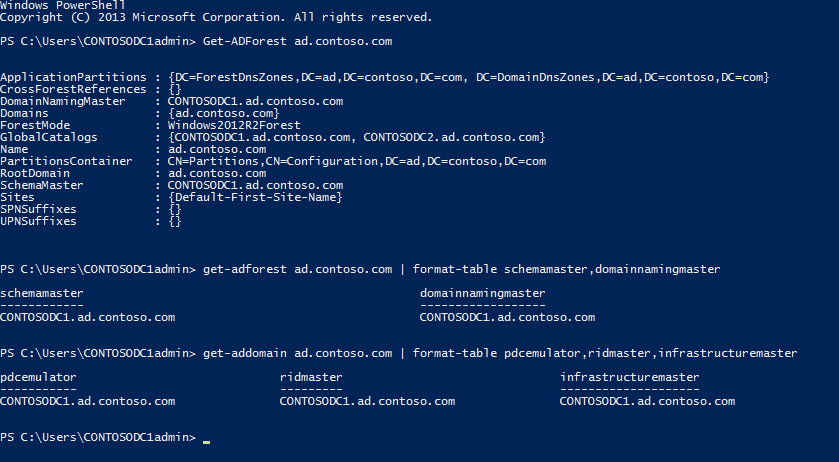 In this easy Ask the Admin, I’ll show you how to use PowerShell to view, transfer and seize Active Directory FSMO roles.

Active Directory administration using the provided management tools from Microsoft has always been a little messy. However, the Active Directory Administrative Center (ADAC) that’s included in newer versions of Windows Server helps rectify that situation. With that said, there are some tasks, such as managing FSMO roles, that are not possible to do in ADAC.

Rather than navigate the legacy management consoles to manage FSMO roles, I recommend having a look at a few simple PowerShell cmdlets that can help you achieve your goals. The cmdlets in this article are supported on Windows Server 2008 R2 and later. Windows PowerShell can be incredibly useful when administrating Group Policy and Active Directory, so I’ll show you how to manage FSMO roles with PowerShell.

1. The first thing you probably would like to do is establish which domain controllers (DCs) hold the FSMO roles in your forest. Although it’s quite likely all five roles will be installed on the first domain controller in the forest, that might not necessarily be the case.

3. In the command output, you’ll see the name of the domain controller that holds the 2 forest-level FSMO roles: SchemaMaster and DomainNamingMaster; along with other information about the forest. To present the information in a more easily readable format, we can pipe the results to the format-list cmdlet as follows:

Similarly, we can do the same to find out which DC holds the three domain-level FSMO roles: 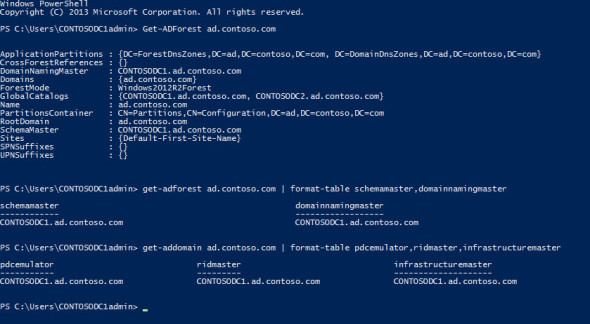 Now that we know exactly which DC holds the five FSMO roles, I’m going to transfer the PDCEmulator role from contosodc1 to contosodc2. Then as a final step, I’ll shutdown the DC and seize the role back to its original location.

1. In the following command, contosodc2 represents that DC, which I will transfer the PDCEmulator role. You can transfer more than one role at a time by adding the roles using a comma-delimited list to the –operationmasterrole parameter. For example, to move all 5 FSMO roles simultaneously: –operationmasterrole pdcemulator,ridmaster,infrastructuremaster,schemamaster,domainnamingmaster

2. You will be asked to confirm the operation. Once the cmdlet has completed, use the get-addomain cmdlet as shown above to confirm that the role has been successfully transferred.

4. You will again be asked to confirm the operation. Remember that once a FSMO role has been seized, the DC from which the role was seized should never be connected to the domain again. You should always proceed with caution when seizing FSMO roles, and in general only seize a role as a last resort.

How to Delete a Protected OU in Active Directory