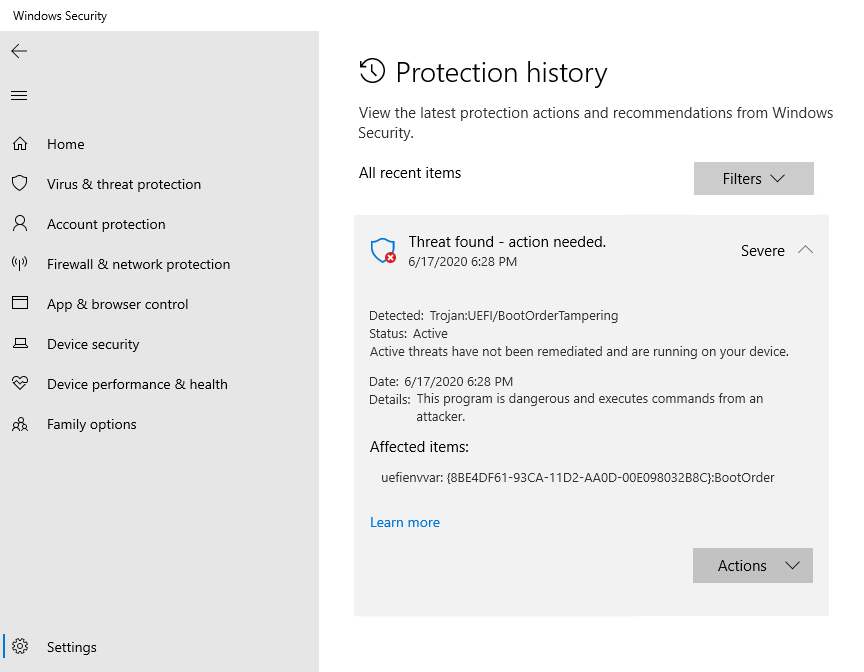 As the antimalware protections in Windows have become more robust over the years, hackers have increasingly turned their attention to firmware. Sometimes referred to as persistent BIOS attacks, firmware-level malware is difficult to detect, and it is also difficult to remove.

Once a hacker has a foothold in firmware, they can disable security protections like antimalware software. Reinstalling the operating system won’t help on a device infected with malicious firmware code. So, like in any other aspect of computer security, prevention is better than cure.

Unified Extensible Firmware Interface (UEFI) replaces the BIOS on modern computing devices. PCs manufactured in the last five years use UEFI instead of BIOS. UEFI is a specification for defining device firmware that interacts with the operating system. It has many advantages over BIOS, including features like Secure Boot, remote diagnostics and repair without an operating system installed, and it can use large disk partitions.

To make it easier for organizations to utilize advanced security protections like those included with Windows Defender System Guard, last year Microsoft announced that it was working with hardware partners on new device security requirements to protect against targeted firmware attacks.

In partnership with PC and chip makers, Secured-Core PCs require devices to meet new standards that follow isolation best practices and that have minimal trust of firmware. The devices are intended for industries whose workers handle intellectual property, customer or personal data, including Personally Identifiable Information (PII).

Secured-Core PCs aren’t intended for everyone because they require hardware, management infrastructure, and expertise that isn’t readily accessible to consumers and small businesses. But for organizations that have the resources to deploy Secured-Core PCs, they provide a more robust and secure computing experience.

Microsoft Defender ATP accesses the firmware using the Serial Peripheral Interface (SPI). SPI flash memory is used to store firmware and it isn’t normally accessible from main memory. Once the device’s chipset has been identified, Microsoft Defender ATP selects the right hardware protocol to read the contents of SPI flash memory. Then the filesystem scanner can analyze content inside the firmware while the detection engine identifies exploits and suspicious activity.