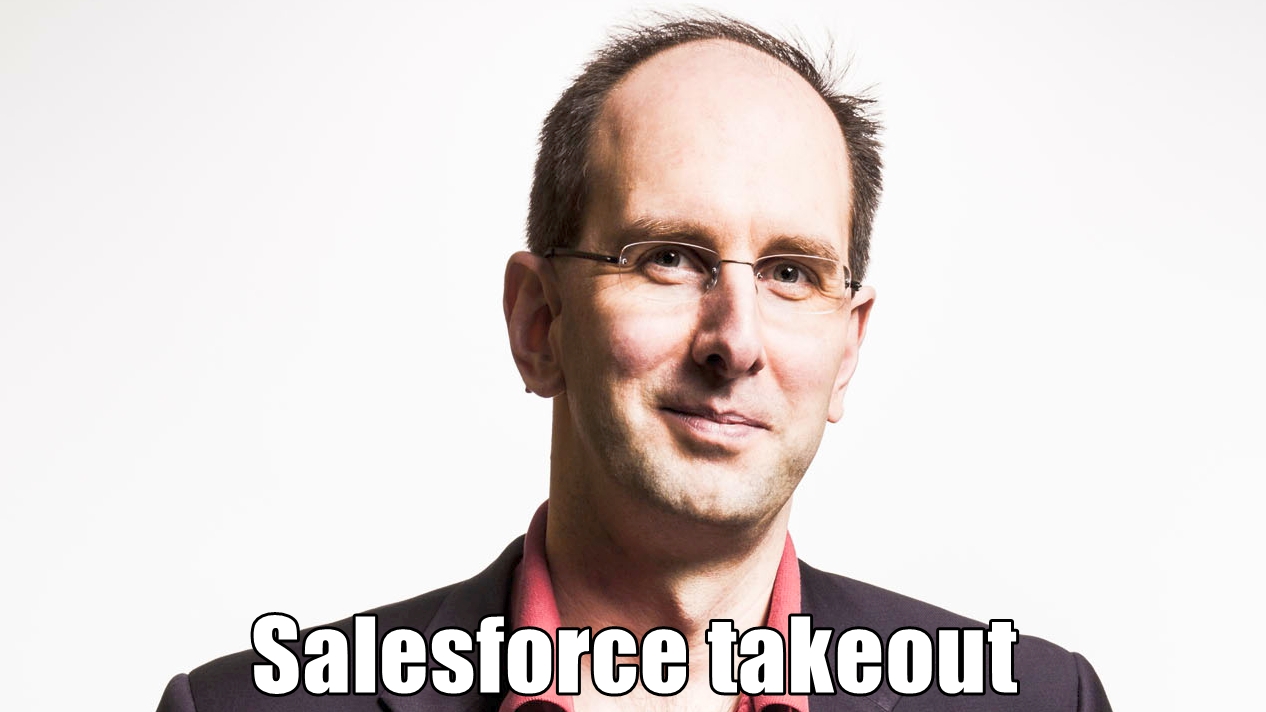 Scott Guthrie: “It was a Salesforce takeout. HP Inc. is planning a massive migration and a big bet on Dynamics.”

HP buys 26,500 seats of Microsoft Dynamics, displacing Salesforce and Oracle. It’s a huge deal, cementing Microsoft as the SaaS leader, according to analysts.

As goes SaaS, so goes IaaS and PaaS? Scott Guthrie certainly thinks so, arguing that only Amazon stands between Microsoft and the cloud top spot.

Who’d a thunk it, just a few years ago? In today’s IT Newspro, we marvel at how times change.

Your humble newswatcher curated these news nuggets for your entertainment. Not to mention: SpaceX UFO foolishness…

HP is moving from Salesforce and Oracle…to Microsoft. … So this represents a win for Microsoft over two key competitors. … HP plans to roll out the product to about 6,500…salespeople and 20,000 support personnel.
…
The split of the old Hewlett-Packard…into two companies, HPE and HP, meant that there was a lot of sorting…of internal IT. [This] may be just the tip of the iceberg at HP. … HP chief operating officer Jon Flaxman…said the company now runs a grand total of nine (9!) ERP systems.

Microsoft’s customer relationship management cloud is well-regarded. … Salesforce has been shown the door.
…
HP Inc has about 50,000 staff. … Not all will be using Dynamics. But most will use Office 365, which Microsoft has also managed to sell to HP.
…
[But] such projects always bring big risk. … Microsoft may have made HP Inc an offer it couldn’t refuse.
…
The competitive tension is delicious.

So how should we characterize it? Ron Miller tilts:

[It] has to be characterized as huge win for Microsoft. … It’s worth noting [HP] is a customer Salesforce bragged about in its literature.
…
Brent Leary…co-founder [of a] CRM consulting firm…sees this as confirmation that Microsoft’s work to beef up the product could be paying off. “[It] is going to make enterprises…take a serious look at what they have to offer.”
…
It’s also worth noting that when Microsoft grabbed LinkedIn for $26 billion last spring…rumor had it…Salesforce had also been sniffing around LinkedIn. … As for Oracle, HP and Oracle didn’t have much love for one another anyway.
…
Microsoft has to being doing a happy dance this morning.

What about the “interesting” timing? Stuart Lauchlan contextualizes:

With the Dreamforce jamboree around the corner, the timing of HP Inc’s announcement…could have been better. … The loss is another interesting twist in the ongoing evolution [of the] relationship between Salesforce and Microsoft.
…
Salesforce’s only official comment was an unattributed emailed one liner: “Salesforce remains committed to the success of HP Inc as a customer and partner.” … HP Inc had already invested in Office 365 and Azure, so [this] defection can’t have been entirely unexpected. … [It’s] quite a logical development.
…
Nonetheless it doesn’t send out a great message [for] Salesforce. … Two weeks to go before Dreamforce kicks off – and I’m exhausted already!

Anything else in the deal? Mike Wheatley digs a bit deeper:

According to a press release announcing the deal…HP will also use Microsoft’s Azure cloud platform. … Although Salesforce will be miffed, the move doesn’t come as a major surprise.
…
Microsoft is sure to celebrate it as another big win. … The company only recently surpassed Salesforce as the No. 1 one vendor in…SaaS.

Isn’t it time for a colorful military metaphor? Kat McKerrow explains How Microsoft Is Winning the War in the Cloud:

The Microsoft/HP deal…helps propel Microsoft’s own cloud business into… well… the clouds.. … That means big profits in [the SaaS market, which] grew at a year-over-year rate of 33%.
…
And now Microsoft will be the leader…beating out not only Salesforce but also Cisco, Adobe and Oracle. [Cloud] will continue to generate its profit growth as…traditional software…sales fall by the wayside.
…
Cloud continues to redefine how the world does business. … Microsoft should continue to expand and take over in this space.

But where are the bombastic Microsoft quotes? Dan “baby you’re a” Richman watched Scott Guthrie:

Microsoft’s executive VP of cloud and enterprise, in an on-stage interview at the Deutsche Bank technology conference today [said HP] “is a very large Salesforce shop — or they were.” … “It was a Salesforce takeout.”
…
Guthrie spoke for about 45 minutes on a broad range of topics. … He views the public-cloud arena as “essentially a two-horse race” between Microsoft and Amazon. [They] are “definitely in an arms race, which is kind of funny because we can almost see each other across the lake.” [But] we focus on hybrid, which is probably our biggest differentiator.

More great links from Petri, IT Unity, Thurrott and abroad:

No, the SpaceX Falcon 9 didn’t explode because of a UFO
[warning: Contains giant spiders]