Microsoft Lists and the Curious Case of Project Osaka 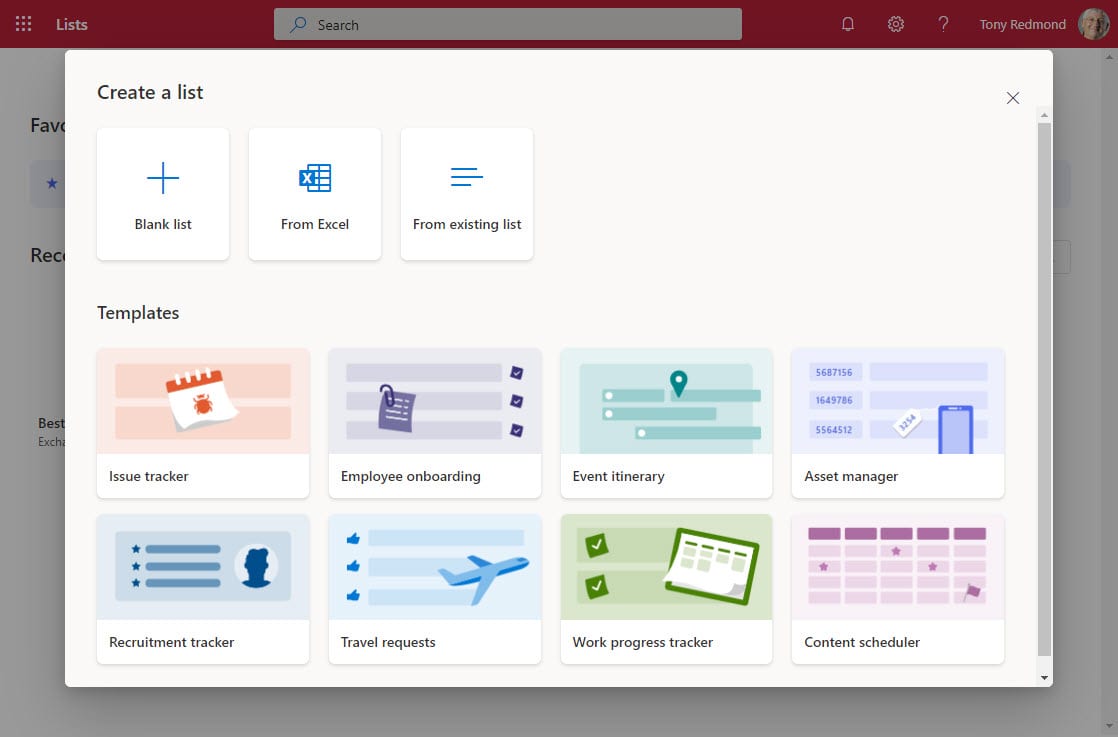 On July 28, Microsoft said that Lists, described as a “smart information tracking app in Microsoft 365,” began rolling out to targeted release tenants with the aim of completing this phase of the deployment by the end of August. The deployment covers business customers for now, but full deployment is expected by the end of October.

Lists are an evolution of traditional SharePoint lists, promoted to become a new Office 365 app and with its own integration with Teams. The decision to go down this route was popular with the SharePoint community because it preserved investment in the previous generation of lists and showed a path forward to a modern implementation.

Lists also gives Microsoft a competitor against the likes of Airtable and Monday.com in the “part-spreadsheet, part-database” end of the collaboration market and stops Office 365 tenants looking elsewhere for solutions to collect and organize tabular data. Being based on SharePoint Online means that compliance and data governance is taken care of (for instance, you can assign a retention label to an item in a list), along with integration with Power Platform, import and export to Excel, and connections to other parts of Office 365. Given recent events, this looks like the same kind of thing Slack complained about when they protested Microsoft bundling in Office 365 to the EU. To me, it’s just a natural evolution within Office 365.

Some worry about the positioning of Lists within the Office 365 collaboration spectrum. I don’t. It seems clear that Planner, including its new guise as the Tasks app within Teams, is very much an off-the-shelf task tracking application. You can do anything with Planner providing it fits within the boundaries of boards, buckets, and tasks. The Planner integration with the Office 365 message center is a good example of where Planner fits well because a natural alignment exists between notifications of new features and updates and tasks.

Lists deals with much more than tasks because you create lists to fit your needs rather than fitting your needs into some predetermined shape. You should expect to do some up-front work to chart out what data needs to be recorded and how the data will be organized in a list, and probably some tuning after creating the list to make sure it does what you want.

I’m not a SharePoint expert, but I have created many lists over the years in applications like Excel, Access, and other non-Microsoft products. In short, I know what a list is and how it should function. At least, I should.

Impressed with my own confidence, I set out to use Lists. The first step is to create a list (Figure 1), which can come from:

If you don’t have anything to base a list on, you can create a blank list, which means that you build the list by defining the columns in the list and what type of data each column should store.

Naturally enough, you need to give a name to the list (Figure 2). You also need to choose where the list is stored. If it’s a personal list, it ends up in the My lists section of your OneDrive for Business account. If it’s a shared list, you select the site where you want people to access the list. Obviously, you must be a member of the target site to be able to create a list there. The target site must be owned by a Microsoft 365 group (or team).

Once the list is created, you can add the columns. This is where some up-front planning should be done. Sit down, write out the columns the list should contain and what data type each column holds. Figure 3 shows the addition of a column to hold an image. Other column types include hyperlinks, single and multiple lines of text, currency, yes/no, location, and people. Those used to classic SharePoint lists will be in their element at this point as this will be second nature to them.

You can reorder columns in the list, add calculated values, add formatting, add counts and totals to columns, and so on (this article is a useful overview). And once you’ve set everything up, the only thing that’s left to do is add some data.

Given the success of Teams, it’s unsurprising that Microsoft has integrated Lists with Teams. Although the Lists app is available in the Office 365 menu, it’s likely that many people will access Lists through Teams, where they can create new lists or access lists through channel tabs, where they can create a new list just like described above or link to an existing list.

Figure 4 shows my web site list as it appears in a channel tab. Interaction with the list is exactly like through the Lists app. The integration is smooth and should challenge Planner as the most popular channel tab for Teams.

Lists are very flexible and should be able to handle many different requirements for teams and individuals. As I worked with Lists, my mind wandered back to Project Osaka, aka CollabDB, aka the “Office Lists App,” a project which began in 2015. Microsoft dropped Osaka in February 2017 and the app was closed down in March 2017.

I spent some time working with Osaka before its demise and was impressed at its capabilities. I was surprised when Microsoft made the decision to cut the project. Now that Lists is available, I see why this happened. Had Osaka been launched, it would have been a direct competitor to SharePoint Lists. And even worse, Osaka looked better (Figure 5), was easier to use, and could do what SharePoint Lists did at the time. In short, Osaka clashed with SharePoint Online and that couldn’t be allowed to happen.

A lot of what I saw in Osaka in early 2017 is in Lists. But now Lists are based on SharePoint Online and that’s a good thing. The Lists app is better integrated with the rest of Office 365 and more powerful as a result, which should deliver goodness for customers.

Lists fills an important gap in the information technology spectrum. Humans like to organize data into tables or lists. It’s a way that comes naturally to us, perhaps because it is a method taught in schools. Technology attempts to deliver methods to solve manual problems and it is no surprise that IT systems have always been good at creating, manipulating, and processing lists of information. The original punch card was often no more than a way to capture information for insertion into a table.

The Lists app is a welcome addition to Office 365. I can see it meeting lots of requirements for organizations, after they’ve figured out how best to make Lists work well for them.