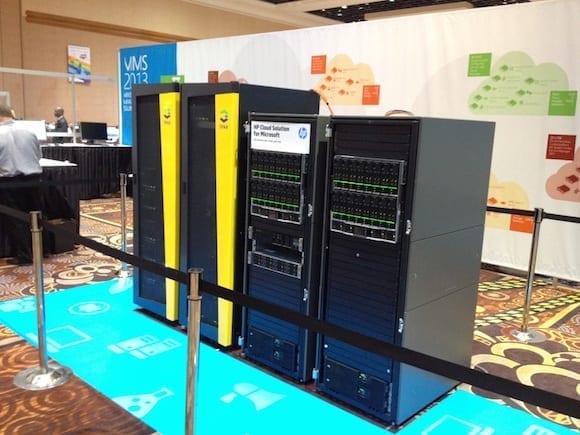 One of the most popular aspects of every MMS event is the hands-on labs that allow attendees to try out the latest features and functionality of Microsoft’s Windows Server and System Center products. This year’s MMS didn’t buck that trend, and HP and Microsoft joined forces once again to put together the lab experience.

This year HP put the results of their efforts on display in a glass-walled booth dubbed the “Serverquarium.” Attendees can walk by and see the actual server and storage hardware running all the virtual machines for all of the live lab sessions, and also look at the control panels to see real-time data on server load, VM density, IOPs, and more.

I was given a tour of the Serverquarium installation by Dung K Hoang, HP’s principal engineer on the project. Hoang mentioned that the compute portion of the hardware relies on 32 HP BL460c BladeServers, each equipped with 2x Intel Zeon CPUs with 8 cores and 256GB of RAM. The storage side relies on more than 153 TB of storage in the form of a single HP 3PAR StoreServ 10800 with 128 x 600GB drives and 64 x 200GB SSD drives.

HP’s Matthias Popp also emailed me some additional details about the MMS Serverquarium setup. “The system we brought to Las Vegas is a 4-controller node 3PAR storage system and the storage capacity is evenly spread across most of the disk drives,” Popp said. “There is still lots of room to grow as this system can handle more than a 1000 drives with up to 8 controllers…you saw two storage racks because one houses the controllers and 80 drives and the other house the rest of the drives.”

Hoang also said that the VMs are managed by Microsoft System Center 2012 SP1 Virtual Machine Manager, and that the private cloud itself was built with Microsoft System Center 2012 SP1 Service Manager. Several HP software products were also used in the configuration, including HP Insight Control for System Center Operations Manager, and a variety of 3PAR and HP plug-ins for System Center with reporting and monitoring capabilities that contribute data to the monitors around the perimeter of the booth that allow onlookers to what’s going on underneath the shiny black display panels on the server and storage hardware.

For more photos, visit our HP Serverquarium photo gallery on the Petri IT Knowledgebase Facebook page. 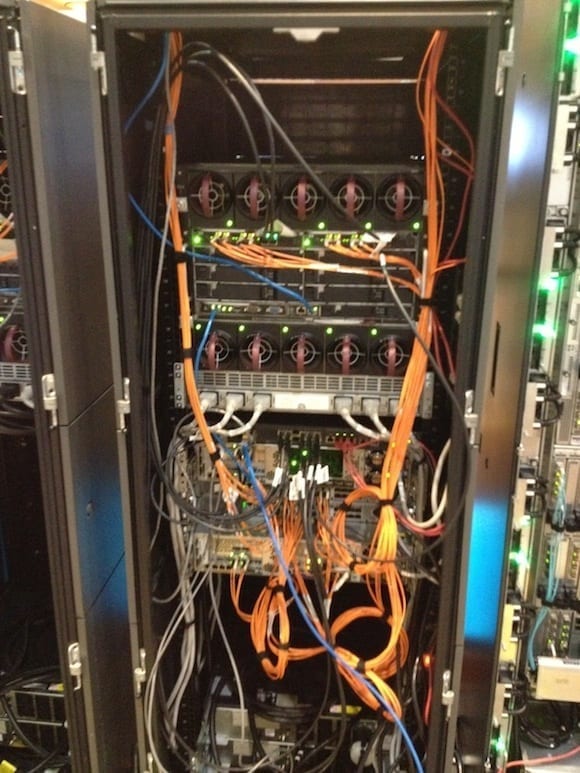 HP’s MMS ‘Serverquarium’ hardware, viewed from the back.

Are you attending MMS 2013 as well? Drop me an email with your thoughts about the conference.