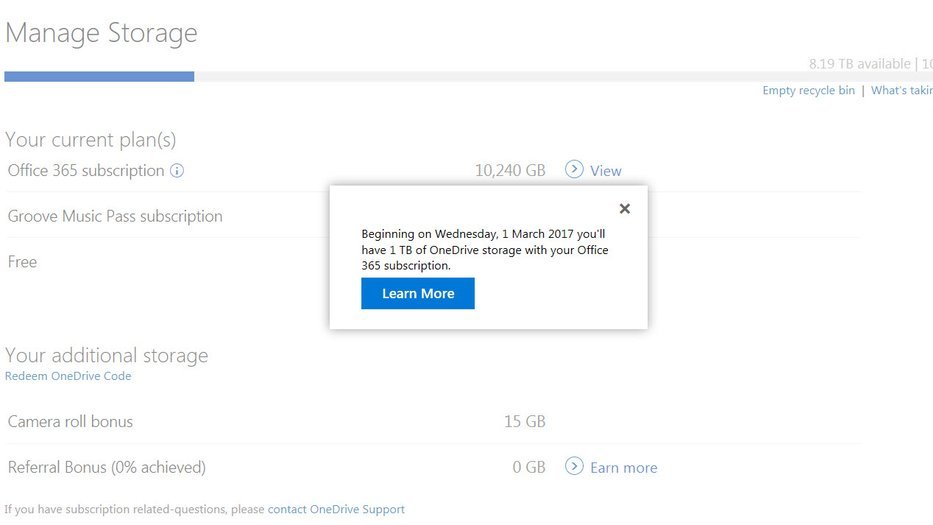 Late last year, Microsoft made big changes to its OneDrive offering for Office 365 users, the company announced that they would be ending the unlimited offering and reverting Office 365 users back to 1TB. They had to make this change as users were abusing the service and offering unlimited storage was not a sustainable business path for the company.

When they announced that they would be reverting the unlimited option back to 1TB, the company said they would give users 12 months to lower their usage below the threshold. At the time, the company did not announce when this 12-month countdown would go being but now we know that it is March 1.

Thanks to a tip from a user in Australia, he received the notification pop-up you see at the top of this post when logged in to manage the storage of his account. As you can see from the prompt, March 1, 2017 is when the unlimited storage will be reduced to 1TB.

With the notification going live one day before March 1, it gives users 12 months and one day to prepare for their storage to be reduced and aligns to the announcement made previously by the company.

When the unlimited storage offering was announced for Office 365 users, many thought would become the trend for cloud based storage services. But with Dropbox, Box, Google and all the others failing to follow Microsoft down this path, the offering no longer made financial sense.