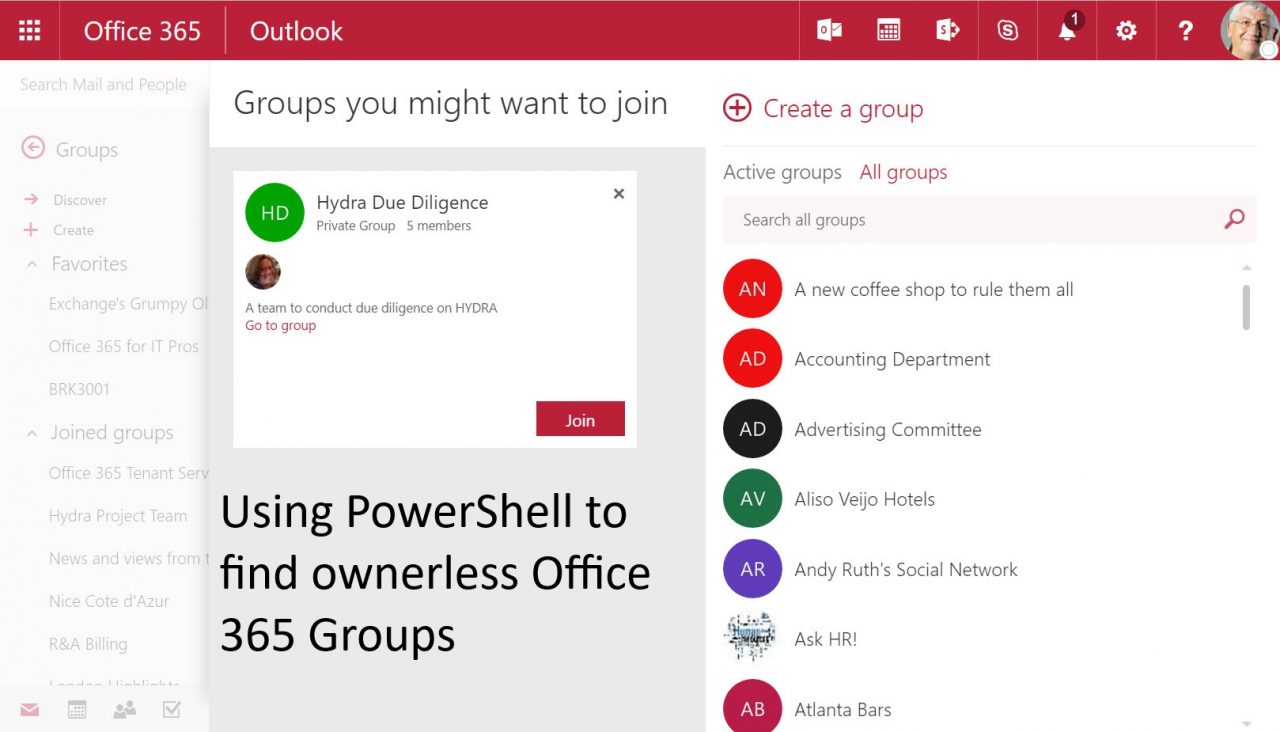 The Need for PowerShell for Office 365 Administration

Some Office 365 administrators break out in a cold sweat at the thought of having to write code. But PowerShell isn’t really code. Well, yes it is, but it’s more like a hacker’s dream in terms of its flexibility and ability to achieve impressive results with just a little effort, especially if you can find some sample code to use as a base. In a nutshell, properly used, PowerShell is an essential part of an administrator’s toolkit.

Users who are nominated as the owners of Office 365 Groups are charged with the administration of those groups. Owners can, for instance, add external guest users to the group or modify the properties of the group. Tenant administrators can perform group management too, but at the expense of doing other stuff. All-in-all, it’s best to devolve group administration to their owners.

However, it’s possible that some groups will eventually end up with no owners. For example, when the account of the only group owner is deleted from Office 365. Tenant administrators are unlikely to check that an account owns any groups (Office 365 Groups or email distribution groups) when they delete a user, so it’s easy to see how the problem might arise.

No Owners, No Management

Nothing really bad will happen if a group doesn’t have any owners. Members will still be able to access all the group resources. The only problem occurs when some group administration in needed, in which case the tenant administrator either does the work themselves or they find someone to act as the group owner.

Office 365 doesn’t include any feature to scan for and report on orphaned groups, so here’s a quick example that I grabbed from Chapter 9 of “Office 365 for IT Pros”. In this case, we scan the ownership information for each group (in the ManagedBy property) to check if it is empty. If so, we flag the error. It’s a quick and simple check using some inelegant but effective code. Some sample results are shown in Figure 1.

Another Way to Attack the Problem

The nice thing about PowerShell is that there’s usually multiple ways to approach a problem. Here’s another example of how you might check for Office 365 Groups without an owner from Eric Zenz, who recently left Microsoft after making a substantial contribution to the development of groups. In this case, a check is performed against Azure Active Directory to determine whether the owner exists. It’s a valid way to crack the problem. I naturally prefer my method, if only because it’s faster.

Another great example of using PowerShell to report on Office 365 Groups can be found in the script to report on added, updated, and deleted groups written by Paul Cunningham and Chris Brown. Instead of the hack-like code examples explained above, this script demonstrates how to set up error handling and reporting in an elegant and powerful way, so it’s a good addition to an administrator’s toolkit.

Of course, you never, ever, ever run PowerShell code that you download from the internet without first checking it thoroughly (check your script execution policy too). That doesn’t mean running scripts against your production tenant just to see what happens.

If you’re still uneasy about the prospect of writing PowerShell, Paul Cunningham has published an excellent walk-through of how to approach writing a script. Of course, my code is not as sophisticated as the kind of scripts Paul produces, but it’s always nice to aspire to write better code.