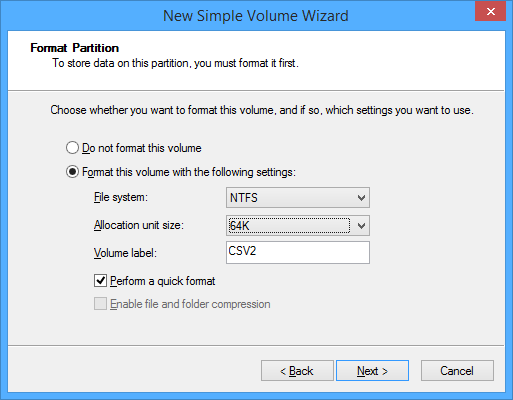 I’ve written a number of articles during my time at the Petri IT Knowledgebase on Storage Spaces, but I have not talked about some of the advanced settings that have a direct impact on the performance of storage for Hyper-V virtual machines. In this article, I’ll share some tips on how to tweak Storage Spaces to get the best performance you can for storing your Hyper-V virtual machines.

The Curse of the Default

Windows Server is a general server product that can do lots of specific tasks. As a result of this, Microsoft has to configure default settings that they perceive are best for most, but not all, scenarios. Many consultants and administrators make the mistake of using the GUI’s wizards and clicking Next, Next, Next until they have what they think is a finished solution. What they are doing is accepting the default under-the-covers values, and this affects performance. But those folks who’ve dug a little deeper and take time to ask questions about default settings have found that there are some changes that should be made.

If you are using a Cluster-in-a-Box (CiB) or a just-a-bunch-of-disks (JBOD) tray for Storage Spaces, then you have a SAS connection between your server and your disks. Multipath IO (MPIO) is used to unify and provide failover if you have multiple connections to the storage system. What you might not know is that Windows Server’s implementation of MPIO has a number of policies that configure how traffic is transmitted across those connections. In my testing I found that having the wrong policy could have a huge negative impact on storage performance.
The best MPIO policy to use is Least Blocks (LB), as this policy sends data through the connection with the least number of blocks currently being processed. If you want to do this, then you are going to have to use some PowerShell.
You can retrieve the current MPIO policy by running Get-MSDSMGlobalDefaultLoadBalancePolicy. To configure Least Blocks as the MPIO policy, you will run:

If only things were that easy! According to Microsoft Support, you will also need to edit the registry, probably followed by the usual reboot requirement. Open the registry editor and navigate to HKEY_LOCAL_MACHINE\SYSTEM\CurrentControlSet\Services\msdsm\Parameters. You will have to create two registry values:

When you write data to a virtual disk (LUN), Storage Spaces will spread the data around the physical disks in the disk pool based on:

What is the best size for the interleave if you intend to store Hyper-V virtual machines on the virtual disk? By default the interleave will be 256 KB, but this is not the best size for optimal performance. One of the most demanding workloads we normally have in virtual machines is a database, such as SQL Server. Microsoft recommends creating virtual disks with a 64 KB interleave size for workloads such as SQL Server. You can do this when creating a new virtual disk by running the New-VirtualDisk cmdlet with the –Interleave parameter.

Here are some other tips to be aware off: