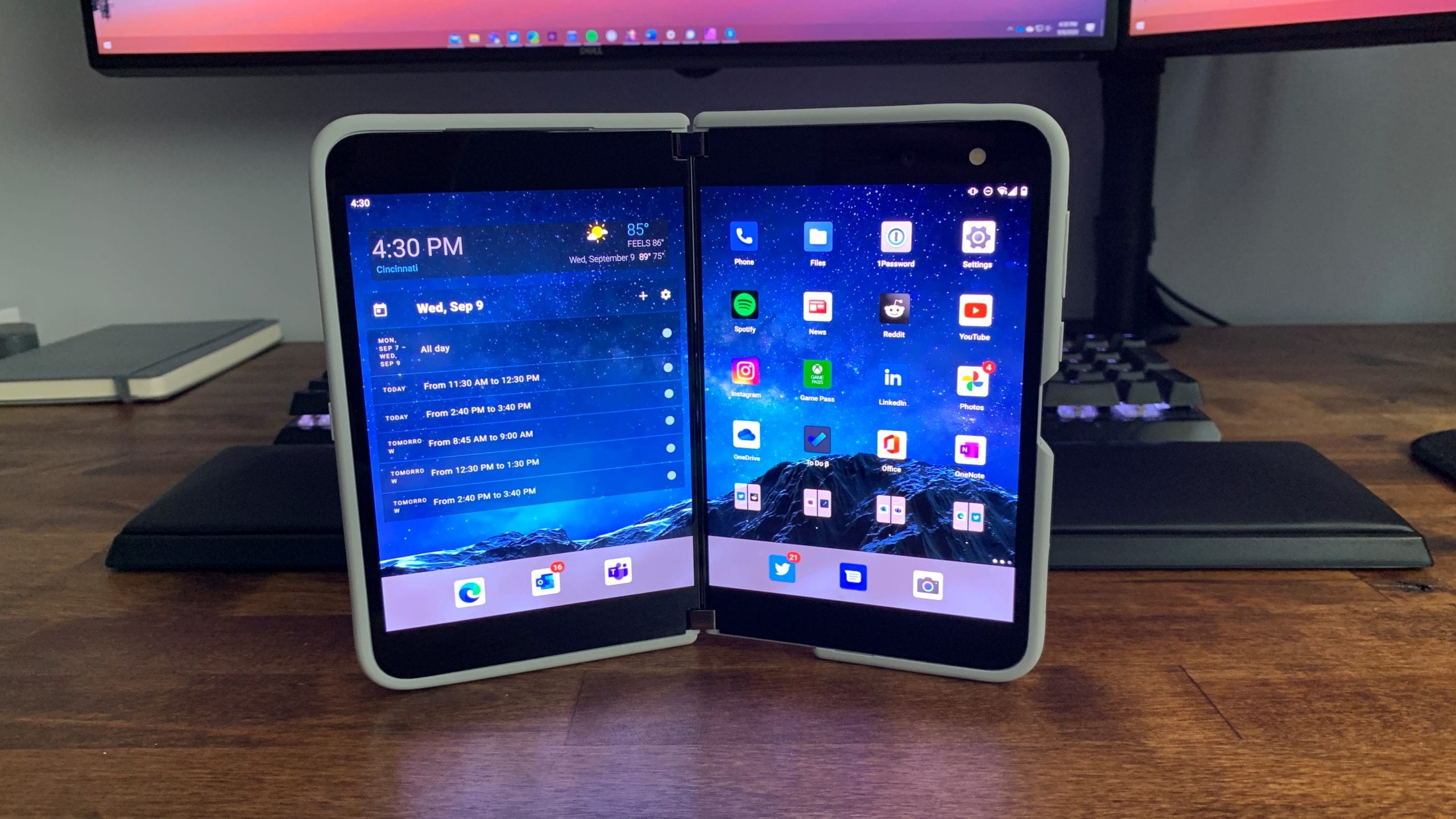 One of the compelling things about a new product launch is watching it evolve over its lifecycle and future iterations. Smartphones evolved through various form-factors to land on a rectangle slab of glass and many other gadgets have to simplify vanished like the MP3 players.

Microsoft has a colorful history when it comes to devices that can fit in your pocket, from Windows Mobile to Windows Phone, and with the launch of the Surface Duo, Microsoft is once again entering the waters of the mobile segment.

With the launch of the Duo about four months behind us, it is a good time to check-in on the device to see how it has held up during that period. That being said, if you are looking for a comprehensive deep-dive, check out my initial review as this is a higher-level look.

Starting on the positive side of the coin, the Duo has held up quite well. Despite a few drops, bumps, and heavy usage, it looks like new. I do highly recommend that if you buy the hardware, put the bumper on the Duo as it makes it much easier to hold and will help protect it.

Microsoft has pushed a couple of updates to the device that have improved performance and stabilized some of the early bugs. The experience continues to feel fluid and not bogged down even after you add a bunch of apps or fill the storage with images.

The fingerprint reader continues to be a high note for the Duo. It is well integrated into the hardware, works without fuss, and is something that you can depend on each and every time.

The hinge or quite honestly, the entire hardware (not the internals) feels like a high-end watch. Microsoft deserves credit for building a foldable that doesn’t feel like a toy and is a pleasure to hold in your hand.

And the premium feel of the Duo never goes away – the heft of the hardware, the sound when you close it, the Duo does look, feel, and act differently. And I think that is ok, I think of this as a modern PDA and not a smartphone which limits who could find this device useful but for the right audience, the Duo can certainly stand out in a crowd.

Not everything is peachy in the land of Duo and there are certainly areas that some will find acceptable and others will find issues, one such item is how you charge the hardware.

The Duo charges via USB-C and for many, that is perfectly acceptable. But for others, and I tend to fall into this category, the lack of wireless charging is a downer. A deal-breaker? Certainly not, but when paying ~$1500, you likely expect a bit more.

And a bit more rings true for the actual specs. The Snapdragon 855, while it does keep the OS running relatively smoothly, it is a dated CPU and is not doing any favors to boost the appeal of the hardware.

The camera meets the minimum spec for acceptability and will get the job done but if you are planning to take photos of anything you really care about, this is not the device for you. But if you need to snap a picture of a receipt for an expense report, it can manage that task.

And finally, LTE instead of 5G. This is the least of my concerns when it comes to the spec sheet but again, paying a premium price for the Duo to not have the option for 5G, this may push away potential buyers.

But of all the features and functions that are either missing, last-gen, or not a premium experience, the biggest letdown since the release has been the lack of software updates.

When Microsoft first shipped the Duo, there was a sense of optimism that the company was going to take this new flagship piece of mobile hardware and aggressively push out updates to its own apps to make the Duo software experience as unique as the hardware itself.

Unfortunately, that is not the case. Even though some apps do take advantage of dual displays, many others do not. Even if you could look past the lack of apps that support two screens, the fact that this device is running Android 10 is a testament to Microsoft’s commitment to updates.

And I think that is the biggest problem with the Duo. Microsoft left Windows Phone behind, gave up on the Band, and Zune is a distant memory too. Microsoft has to prove to the world that it will not give up on anything other than PCs and the Xbox – they can do this by aggressively updating the Duo and making the user experience a first-class citizen in the Microsoft world but sadly, that does not feel like this is the path the company is taking.

Before the Duo launched, every exec at the company was sharing photos of them using the hardware in various ways but following the launch, near-total silence. The Duo was never going to sell 100 million units, it was not a mass-market device, but the company’s marketing and support behind the product has been a letdown.

I really like the idea of the Surface Duo and the hardware execution is near the top of the class in some respects. The device looks and feels like a high-end sports car but it is saddled with the engine of a 2010 econobox and software support that is anything but reassuring.

The Duo has a place in this world if you are looking for a modern-PDA and a device that embodies Microsoft 365 in a physical form, but it is far from a smartphone that is for everyone. More importantly, Microsoft needs to show the world that it is committed to the Duo if it wants the world the take a chance on yet another mobile solution from Redmond.