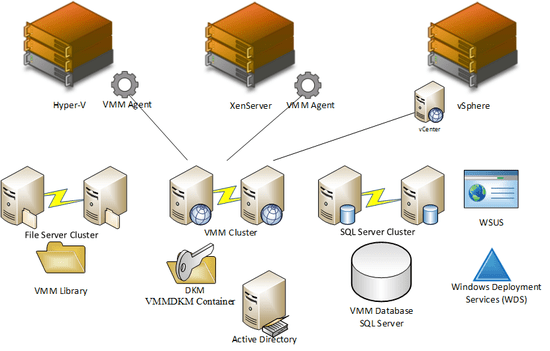 What are the software requirements for System Center Virtual Machine Manager 2012 SP1?

System Center Virtual Machine Manager (VMM) 2012 SP1 supports a wide variety of configurations. Therefore, the full list of supported software is quite long. This article will describe the software requirements for System Center 2012 Service Pack 1 – Virtual Machine Manager for a modern configuration with the latest version of the supported components. Please consult TechNet to see the list of supported legacy software requirements.
Editor’s note: For more information, check out these other articles in the series:

The requirements for the VMM server are as follows:

You should be aware that the computer name must be shorter than 16 characters and cannot contain the string -SCVMM-.  For example, naming the VMM server as SanFran-SCVMM-1 is unsupported. Note the hyphen placement of these supported examples: SanFranSCVMM-1, SanFranSCVMM-1, or SanFranSCVMM1 are all okay.

The following versions of SQL Server are supported:

The configuration should include:

VMM can be installed on the VMM server but this limits scalability of supported managed hosts. You can install the SQL Server on another server or cluster. The server or cluster must be in the same domain or another domain with a 2-way trust with the VMM server’s domain. SQL AlwaysOn is supported by VMM 2012 (it’s not supported by all of System Center 2012 SP1).
You can reuse an existing SQL Server cluster or server.  However, you should use a dedicated SQL instance.

The following operating systems is supported for deploying one or more libraries:

You can replicate the contents of the VMM library using external file-based replication, such as DFS-R, but the metadata in the SQL Server will not be replicated.

The following versions of Hyper-V are supported:

VMware vSphere is also supported. Note that VMM can only manage VMware hosts that are already managed by vCenter. This is because VMware only makes certain features (such as vMotion) possible with this console.

The supported hosts include:

VMM 2012 SP1 can deploy Hyper-V hosts to bare-metal hosts that are configured with a baseboard management controller (BMC – admin credentials and IP address). To do this you will need the following.

An optional feature of VMM is baseline patch management. This process is more manual than using WSUS with Windows Server Cluster Aware Updating, but it can be used as a separate patch compliance solution by fabric administrators. A 64-bit edition of WSUS is required.

The WSUS server can be a downstream one and it does not have to be dedicated to VMM.

There is no Self-Service console in VMM 2012 SP1. As a licensed System Center customer you are entitled to use any and/or all of the rest of the System Center product, including self-service solutions such as: