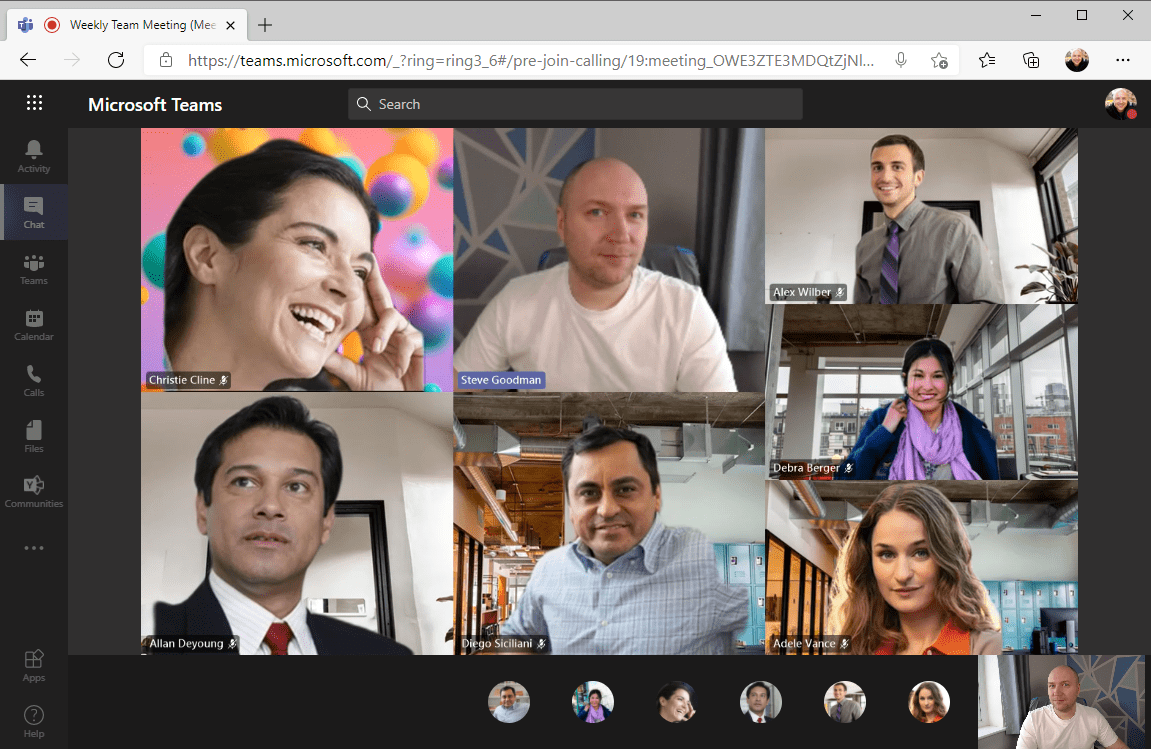 Microsoft has done well to ensure that Teams provides a consistent experience across the desktop client, web browser, or mobile apps.

However, the web version of Teams lacks several desktop features for meetings, in particular the ability to see the video feed for more than one person at a time.

New features are launching in February that solves this, bringing up to 49 video feeds at once with Large Gallery view, Together Mode and 2×2 Gallery View to Edge and Chrome web browsers. You can try out some of these features early by switching on Public Preview.

Large Gallery view and Together mode are different from normal multi-stream videos in Teams.

On the full desktop and mobile Teams clients, the standard built-in gallery view arranges the video streams within the app itself, receiving multiple video feeds and placing them on the screen in-app in what can seem to be a random order. For example, if you see someone in the top left on your screen, it is very unlikely someone else in the meeting will see them in the same place.

Together Mode was launched in July 2020 and initially only available on full desktop client such as PC and Mac, before becoming available on iPhones and iPads in October 2020 and Android last month.

This feature is designed to make meetings less tiring, and provides different seating arrangements and, like Large Gallery view, is rendered in the cloud and streamed to everyone with the view switched on.

Switching on Large Gallery and Together Mode on the Web

Teams on the web uses the meeting experience with the meeting controls overlaid in the lower third of the screen. This position is different to the desktop client.

Select the ellipsis button to open the meeting menu, and you will see Gallery, Large Gallery (Preview) and Together Mode (Preview).

The Gallery View is the default view. At the time of writing (late January), this provides the single video feed showing the active speaker view.

According to the Microsoft 365 Roadmap, we should expect the 2×2 view by February. This indicates that when the 2×2 gallery feature does arrive, you won’t need to do anything to enable it.

If you don’t see the menu shown above, you need to switch to Public Preview mode in Teams. You can do this by opening the settings dropdown menu in the top right, then choosing About>Public Preview:

If you do not see this option, then your IT administrator has not enabled it for you.

However, you can temporarily enable preview features by editing the URL in the browser to include the query ring=ring3_6, for example, https://teams.microsoft.com/_?ring=ring3_6#/calendarv2

Large Gallery view is more useful in a web browser

Large Gallery view in Teams on the web is different from the desktop version.

The desktop version requires 10 or more people in a meeting to use the feature.  No such limitation appears in the web version and this means you can enable it for smaller meetings, even those with one or two people.

Because the feed is rendered in the cloud and not within the client, this is likely to mean using Large Gallery view will provide a more consistent experience and potentially perform better than a 2×2 Gallery View rendered in the browser.

New feature availability for other web-based and WebRTC-based scenarios

Support is only available for these features on the Edge and Google Chrome, which are the only browsers that are fully supported for Teams; Safari and Firefox have limitations.

There are several scenarios where people will use Teams in a web browser rather than a desktop client.

The most common scenario is when a guest joins your meeting. A guest does not sign-in to Teams at all and enters only sees a join screen and the meeting itself. We have tested these features and they are working as a guest, without switching on Public Preview functionality.

Some organizations allow people to access Teams and Microsoft 365 from home PCs. To ensure that sensitive data cannot be downloaded, these organizations use Conditional Access Session Policies to filter traffic through Microsoft Cloud App Security. This restricts users on home devices to Teams on the web and redirects requests though the MCAS service. These new features work in this scenario when Public Preview is switched on.

On Linux machines, a desktop version of the Teams client is available, but it doesn’t receive the same attention as PC and Mac and hasn’t received newer meeting features like these. However, when using Edge Insider on Ubuntu 20.04, we can confirm that these features are available.

If you are using (or have deployed) the Microsoft Teams VDI version of the client with integrations for Windows Virtual Desktop or Citrix environment, then this works in a similar way to the web client, using the WebRTC protocol to display a single video stream.

Large Gallery view and Together Mode on VDI are not mentioned in these Microsoft 365 Roadmap updates, so we don’t expect it to work. However, being available via the web browser means that it is likely the VDI client will follow with support soon.