What Is Microsoft Flow? 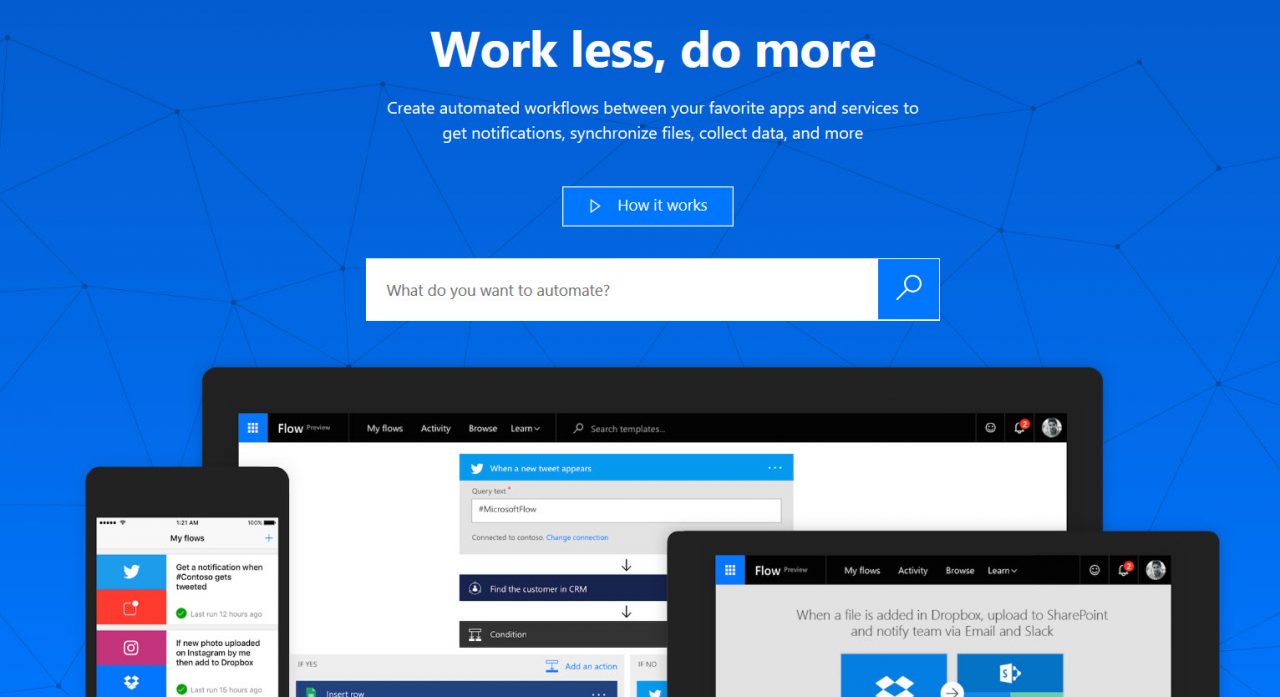 In today’s Ask the Admin, I’ll take a look at Microsoft Flow and how it can help users automate common tasks and improve workflow.

It’s not uncommon for applications and services to have publicly accessible Application Programming Interfaces, or APIs, allowing developers to create sophisticated solutions that utilize many apps or services from different providers. Enterprise products, such as SharePoint, provide a means to implement workflows, but the ability to connect to apps or services provided by third parties is often a complex affair. And for us mere mortals, tapping into this technology has until now generally relied on IT professionals or developers to provide the necessary skills to code a solution.

IFTTT (If This Then That) has been around since 2011, and is a free service that triggers actions based on conditional IF statements. For example, you could configure a workflow that automatically posts photos you upload to Instagram to your Twitter feed, or post status updates on multiple social networks simultaneously. Productivity solutions might include automatically creating a Wunderlist task from emails tagged as important, or synchronizing files from one cloud storage provider to another.

Recipes in IFTTT and predefined solutions that allow users to automate workflows without any understanding of how to work with channels, triggers or actions. There’s a wide range of publicly available IFTTT recipes available, or you can share your own. IFTTT is free and has apps available for iOS and Android, although IFTTT can be used via the website.

Zapier works just like IFTTT, but instead calls recipes ‘zaps’. If IFTTT is aimed at consumers, Zapier provides a more business-orientated service and integrates with more business services by default. Although using IFTTT, it is possible to create your own channels to connect to an app or service that’s not otherwise provided for, Zapier also allows for more than two steps in a workflow, i.e., more than just ‘if this then that’.

So where does Microsoft Flow fit in to the picture? Released this year in preview, Flow provides a similar service to IFTTT and Zapier but with a bias towards Microsoft services (including Office 365, OneDrive and SQL Server). But that’s not to say there isn’t integration with third-party apps; Dropbox, Twitter, Salesforce, several Google products and Slack appear in the list of Microsoft Flow supported services, and I’m sure more will follow.

Flow is free while in preview, but it’s not clear yet if Microsoft will charge for the service once it reaches general availability. Flow provides a library of templates (recipes) with predefined workflows, but you can also create and share your own. There’s also an app for iOS, but again, this isn’t a requirement for using Flow.

Keep an eye out for a future Ask the Admin on the Petri IT Knowledgebase, where I’ll show you how to get started with Microsoft Flow and set up some simple workflows.