What Is Microsoft’s Intelligent Edge?

There’s been a lot of talk again this year at Build about Azure, IoT, and cloud computing in general. But one term that keeps cropping up is the ‘Intelligent Edge’. In this Ask the Admin, I’ll explain Microsoft’s cloud vision in more detail.

Microsoft already has two products incorporating the words ‘Intelligent’ and ‘Edge’. Edge is the modern browser that comes with Windows 10 and IntelliSense is a code completion technology in Visual Studio and the Windows PowerShell ISE. But Microsoft’s Intelligent Edge, which Satya Nadella touted at this year’s Build conference, is a term used to describe the offloading of artificial intelligence (AI) from the cloud to on-premises Internet-of-Things (IoT) devices. IoT devices collect data using sensors to provide information about the operational status of machines, like cars, fridge freezers, factory machines, and much more.

Cloud computing allows organizations of all sizes to utilize compute resources on a massive scale, whenever they need it, but without the burden of paying for it at times when it isn’t required. But doing all the heavy lifting in the cloud also comes at a cost. Sending telemetry to the cloud, waiting for it to be processed, and then sending data back to devices can involve a significant latency. 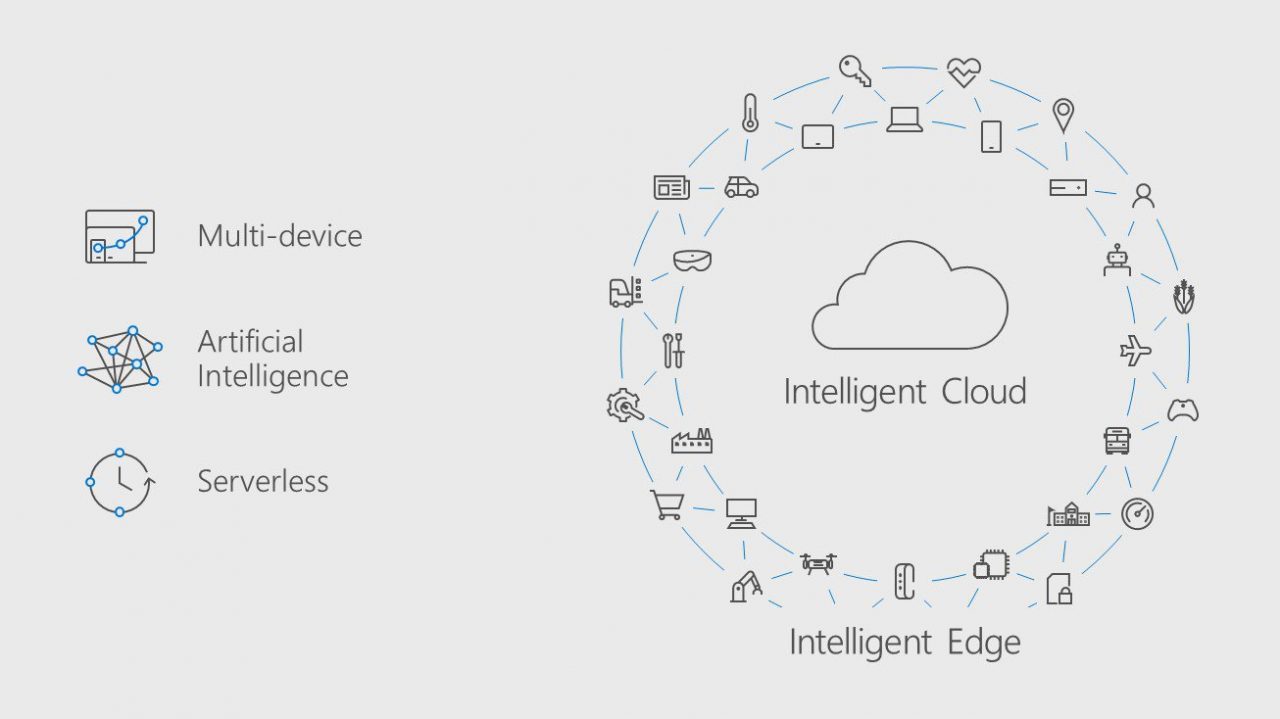 The Intelligent Edge solves that problem by lifting logic developed to run in the cloud and exporting it to devices near to where data is collected. Not only can latency be a problem, but companies often develop logic to run locally on IoT devices for when a network failure occurs. That logic is already running in the cloud but must be duplicated to run locally. The Intelligent Edge alleviates the need to develop code for two different platforms.

The Intelligent Edge consists of several different products: Azure IoT Edge, Azure Stack, Azure Sphere, and Windows 10 IoT. Azure IoT Edge is a cross-platform runtime for Windows and Linux that takes cloud intelligence and analytics and exports it to IoT devices, where it can be run locally and managed from the cloud. Azure services, like Functions, Stream Analytics, and Machine Learning, can be packaged in Docker containers and deployed to run directly on IoT devices with even less compute resources than a Raspberry Pi. Using a centralized dashboard, organizations can develop and test code in the cloud and export the code to run directly on IoT devices with Azure IoT Edge.

In a demo at Build, Microsoft demonstrated how using Azure IoT, one company was able to reduce the emergency response time for shutting down factory equipment when it enters a dangerous state from 2142 to 103 milliseconds. That’s twenty times faster as a result of taking the cloud out of the loop and using the same code that was developed to run in the cloud.

Nadella went on to describe how using this technology, it would be possible to prevent accidents in the workplace and solve other problems if we could create a ‘digital twin’ of real-world information collected from IoT devices and analyze it in real-time to detect anomalies. This is much like we do with text-based information today. The Intelligent Edge plays an important role in making sure telemetry from IoT devices can be processed in real-time.

For problems that might require more computational power than is available on IoT devices, Nadella mentioned that Azure Stack could provide a solution. Azure Stack is the Azure cloud in a box that organizations can deploy in their own datacenters on approved hardware. Another example, which involved monitoring people, objects, and activities in a workplace using cognitive cameras, processed 27 million recognitions per second. The solution utilized the Azure cloud and Intelligent Edge with the help of Azure Stack.

A few years back, it seemed like everything was moving to the cloud and that there wasn’t much room for on-premises solutions. But Microsoft’s secret weapon is the hybrid-cloud, where tried and tested business solutions work together with cloud services. Other companies can’t match Microsoft’s experience in this area. Azure File Sync, which is currently in preview, also bridges cloud and on-premises solutions by using an agent for Windows Server that caches frequently used files from cloud storage for consistent on-premises file share performance.

The Intelligent Edge is a step towards a hybrid cloud for IoT devices and opens new possibilities for AI solutions that need to work in real-time. The Build demos were simple and Microsoft admitted that it is still early days for the Intelligent Edge. Azure IoT Edge looks like it will provide a highly-integrated solution for developers to export their code to IoT devices and manage it via the cloud.