Will Microsoft TechEd 2015 live on outside the US and Europe? 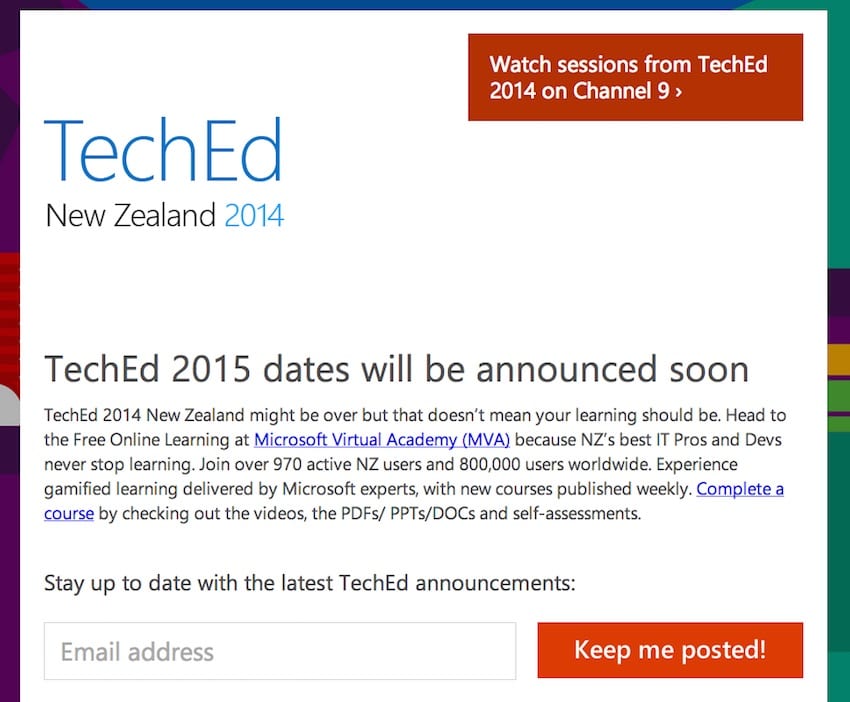 I’ve inserted a screen grab of the Microsoft TechEd New Zealand 2015 countdown page below. According to a source also based in Australia, there will be multiple TechEd events in Australia for 2015 as well. “As far as anyone down here seems to know, it’s definitely TechEd NZ 2015 and there will be several TechEd Australia 2015 [events] as well.”

Will the Microsoft TechEd brand continue to exist outside the United States? (Image: Microsoft)

We’ve been reporting on Microsoft TechEd 2014 for most of this week, and Microsoft has been pretty clear in all of their communication to date that — at least in North America — the new Microsoft Ignite Conference will serve as the successor to TechEd and many of Microsoft’s other IT-focused conferences, namely the now-defunct Microsoft Exchange Conference, Microsoft SharePoint Conference, and others.

I’ve reached out to Microsoft for additional comment/clarification on the fate of the Microsoft TechEd conference brand outside of the US, and I’ll update this article with an official response when (and if) I receive one. If you’re an IT professional based in New Zealand or Australia that has regularly attended TechEd events in both regions, I’d love to hear your thoughts, or if you’ve seen/heard anything about TechEd 2015 in Australia or New Zealand please drop me an email.

So what do you think of the idea of Microsoft TechEd continuing on outside the Unites States and Europe? I’d love to hear what you think, so please add a comment to this blog post, or contact me on Twitter or Google+. You can also catch up on my posts in the Petri IT Knowledgebase forums.