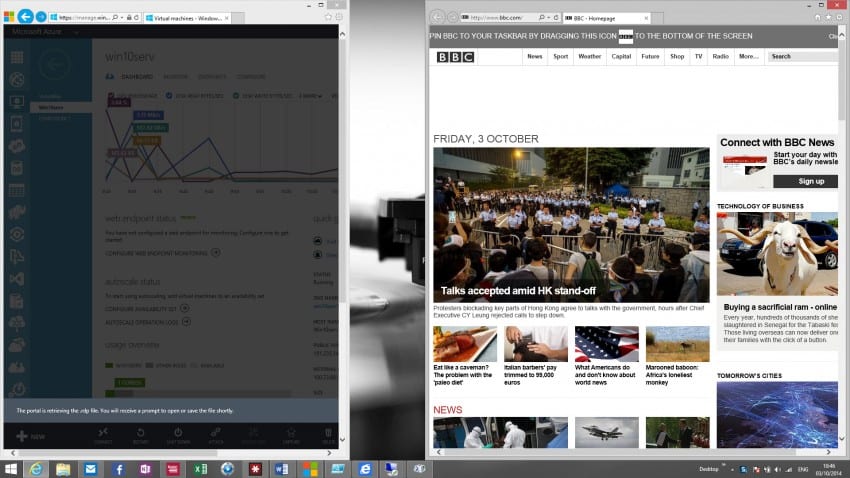 Back in the summer, I wrote Why You Should Embrace Windows 8 Apps, where I vented my frustration at the lack of innovation on the desktop and stated my preference for the simpler Modern UI in Windows 8. Because it’s not realistic to completely abandon the desktop, largely due to the lack of WinRT Office suite apps, the result of embracing Windows 8 apps is a jarring mix of two environments.

We also need to consider the mess that results from application switching in Windows 8. Pressing the ALT+TAB keys cycles through all open apps, but only includes WinRT apps that haven’t been suspended. So, if your apps are taking a nap, then you’ll need to go looking for them in the panel that appears when the pointer is moved to the left of the screen. And assuming you don’t count the desktop as an app, the WIN+TAB key combination only cycles through WinRT applications, leaving Windows 8 with something of an app platform disjoint.

But the merger of Modern UI and desktop came one step closer on September 30th, when Microsoft revealed the Windows 10 Technical Preview. So can Microsoft’s new client OS provide a better desktop experience for novice and advanced users, and successfully integrate WinRT apps with the desktop? In this article I’ll take a closer look at the Windows 10 Snap, Task View, and Virtual Desktops features.

Desktop apps in Windows 8 can be snapped left and right, but the Snap goodness in the Windows 10 Technical Preview has been extended to include quadrants, i.e. top left, bottom left, top right, and bottom right, allowing up to four windows to be snapped simultaneously. Once a window has been snapped top left, the Snap keyboard shortcuts (WIN+Arrows) can be used to expand it horizontally. With that said, trying to position a second window horizontally above or below still requires some manual dexterity. Although I don’t see myself snapping more than two windows often, it’s nice to have the ability, especially when using a large monitor.

If you snap windows left and right in Windows 8, then subsequently decide to make one smaller, then you’ll be left with a gap, which you can see in the following image below. Usually the idea is to make one window smaller, leaving room to make the other bigger in the available space. In Windows 8, however, you need to manually resize the window you want to make larger, which can be awkward, particularly if using a touchpad.

In Windows 10, while snapped windows are not locked together, i.e. making one smaller doesn’t automatically increase the size of the other. All you need to do is snap the window you want to make bigger again, and instead of occupying exactly half the screen, it fills the available space completely. 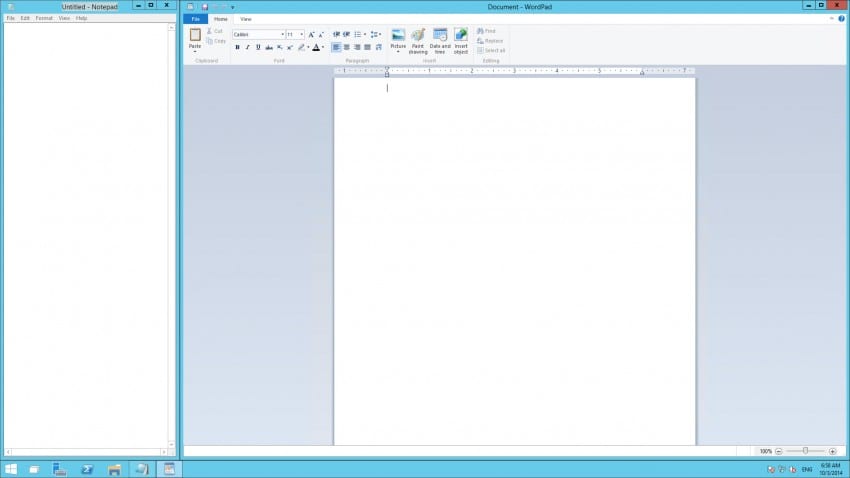 Using the mouse to snap a window activates Snap Assist if there are other windows open on the desktop. Snap Assist displays windows as large thumbnails, similar to how applications are displayed in Task View, and allows a window to be snapped into the remaining space, saving users the trouble of bringing a second application into focus and manually snapping it into position. 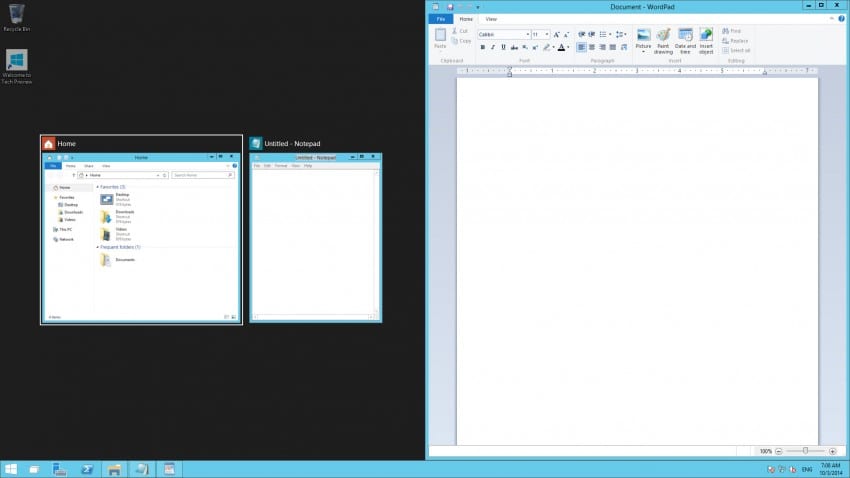 The ALT+TAB key combination in the Windows 10 Technical Preview functions the same as in Windows 8, allowing you to scroll through all your open applications, but with much larger preview icons. It doesn’t matter which apps are open should you have more than one active desktop, as you can scroll through the entire list. That’s great, because sometimes I don’t care where an app is located, I just want to jump to it quickly. The taskbar is another place where you can switch to apps regardless of the desktop in which they are running.

The WIN+TAB keys opens Task View instead of the app panel found in Windows 8, which listed WinRT apps and the desktop. Task View initially shows only the applications open on the currently active desktop. You have the option to switch applications on the current desktop, or switch desktops using the mouse, i.e. you can’t scroll through the application list or change desktops by repeatedly pressing the WIN+TAB keys. Nevertheless, Task View gives users the option to switch between apps that have been grouped together on virtual desktops, without being distracted by other open programs.

Virtual desktops in the Windows 10 Technical Preview are really groups of applications. What I mean is that when you add a desktop in Task View, you don’t actually get a new desktop, but a view with a set of applications of your choosing. The same desktop icons, files, and taskbar appear regardless of the virtual desktop that is currently active, and I believe that is exactly the way Task View should work. With that said, there’s potentially one caveat: the name for this feature might confuse some users, where the name Application Groups would make more sense.

When an application is open on a desktop other than the one currently active, it still appears in the taskbar, but its presence on a different desktop is delineated by a small indicator under the icon. This disappears should more than one instance of the same application be open. 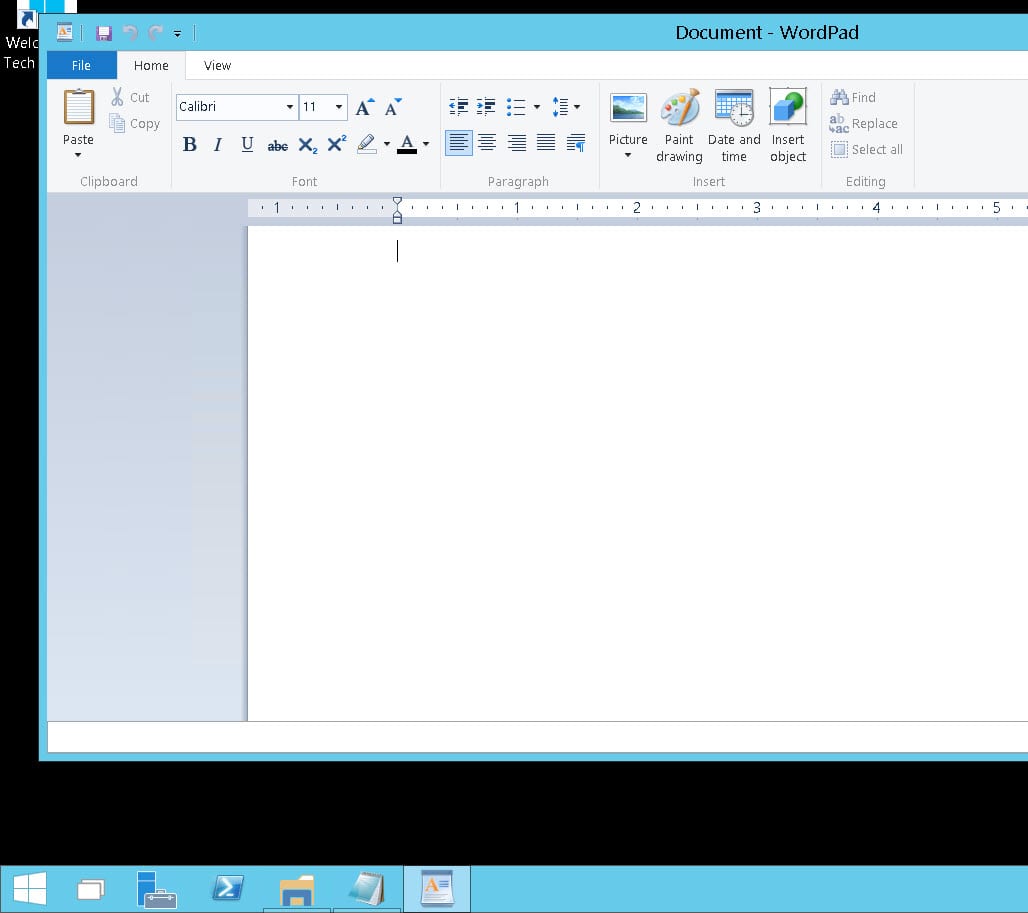 If you already have applications open that you want to group together on a virtual desktop, switch to Task View, right click an app, and select the desktop you’d like to move it to. Desktops are listed numerically in the menu. 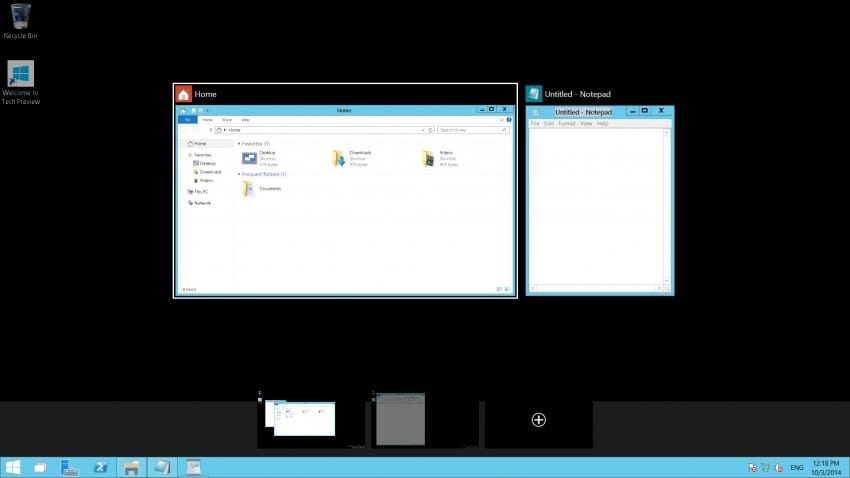 While it’s good to see this functionality included in whatever form, Microsoft needs to develop Task View so that users can drag and drop applications between desktops. Selecting Desktop 1, Desktop 2, Desktop 3 etc. via a right click is hardly discoverable or simple, and is disruptive in what is otherwise a well thought out feature.

I was concerned when I heard that Microsoft was adding virtual desktops to Windows, as the execution was going to be crucial to ensure it didn’t complicate the user experience and also provide genuine productivity improvements. As it turns out, my first impressions are that the implementation is good, and importantly provides the choice to isolate apps on virtual desktops so users can focus on a task, or to break out and switch to any running application when the time is right.

Task View and the new Snap features are enough reason for me to bail on Windows 8, and Windows 10 is shaping up to be a release that could finally provide sufficient reason for enterprise users to move away from Windows 7. And if the return of the Start menu isn’t enough, all that’s needed now are some consumer hooks to persuade the Windows XP diehards that it really is time to buy a new PC, notebook or 2-in-1 device, but for that we’ll probably have to wait for the consumer preview in early 2015.