It’s hard to imagine Windows without its built-in search index. First, we got Windows Desktop Search (WDS) as an add-in for Windows XP and Windows Server 2003. But there was a time when Windows needed to crawl the hard disk to find a long-lost file. Windows Search is the service that indexes your hard disk to provide near-instant results when you search from the taskbar, File Explorer, Outlook, Timeline, web history in Edge, and some UWP apps.

But Windows Search isn’t perfect. Back in the Fall Creators Update, Microsoft introduced some important changes to reduce the number of index merges. A fully merged index can return results ten times faster than a fragmented index but merging indexes is CPU intensive. The changes included less merges and a series of other improvements. And according to Microsoft, resulted in a forty percent reduction in processing of text-heavy files, smoothing out some CPU spikes, and many fixes to prevent index corruption.

Roll forward to Windows 10 version 1809 (RS5), due to be released late September or early October, and Microsoft is making more changes to Windows Search. The most obvious are cosmetic changes to the results presented in the taskbar. In Windows 10 version 1803, you get search previews for web results. But they are not expanded by default. In RS5, previews will be expanded by default and additionally, recent documents, files, Bing quick-answers, and software downloads also get previews. Some results will give users the option to perform related tasks. For example, if you search for an app, you can jump to the app’s settings or pin it to the Start menu. 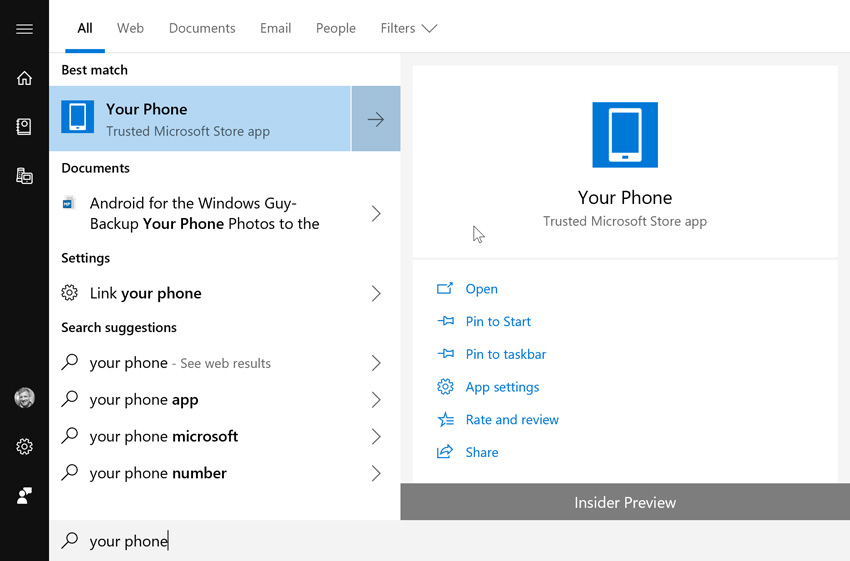 Microsoft has been working for four years to reduce the CPU usage of Windows Search. And that work is still ongoing. In RS5, changes to the throttling algorithm should help reduce CPU usage. The development team is also aware of concerns surrounding excessive disk usage causing wear to solid-state drives (SSDs). While nothing concrete has been announced, Microsoft is aware of the issue and says that improving index compression logic reduces writes and therefore wear on SSDs.

Search Back in the Spotlight

Search is critical to productivity in Windows 10. While the current experience isn’t bad, search needs to be more intelligent about the results it returns. For example, I have a scanned copy of my passport in my Documents folder. But I also have some recently downloaded files with the word ‘password’ in the file names. If I search for ‘passport’, I’d like Windows Search to prioritize files in Documents over the Downloads folder.

But the most frustrating issue that I come across is the inability of Windows Search to pull up the right results when I make a typo. If I type ‘passprt’ instead of ‘passport’, search should be intelligent enough to guess that I mean ‘passport’. Much like Google and Bing do for web searches. This is known as ‘fuzzy keyword search’. But as it stands in Windows 10 version 1803, the taskbar search experience only returns web results for fuzzy keyword searches. That doesn’t help me find my ‘passprt’ scan.

Finally, Timeline is one of those features I rarely use but when I do it is invaluable. But it’s so well hidden that users will either never find it, or as I often do, just forgot that it is there. I don’t know how to elegantly bring Timeline more to the forefront, but I think that it will be underutilized in its current configuration.